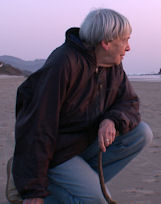 A glorious tribute to a captivatingly astute writer, “Worlds of Ursula K. Le Guin” intermixes original images and motion graphics of the environments described in Le Guin books to tell the story of one of the greatest science fiction writers in the last 100 years. Though she grew up in California’s gorgeous Napa Valley and was indelibly influenced by her family’s closeness to nature and her father’s work as an anthropologist, she ended up living in Oregon where she hikes its trails in rocky deserts and luxuriates in its craggy Pacific seascape as she discusses the foundational settings for her writing.

In 2016, the New York Times called Le Guin “American’s greatest living science fiction writer.” Mixed with her extraordinarily detailed extraterrestrial environments, she experimented with gender roles, creating an androgynous population in “The Left Hand of Darkness” back in the ’60s that was prescient of thoughts to come 50 years later.

At the hardcore base of her stories, the brilliant director Arwen Curry lets environments have a major role in reflecting her story – a battle with an internal challenge. Fundamentally, Le Guin asks, “How do I become a good person?”

As she reads passages from her writing, stirring motion graphics show not only an exactness in the detail she writes, but an insight to the universal conflicts that Le Guin wrestled with for a lifetime. She says, “My job is not to come up with answers, but to open windows.” Indeed, she is a fine explorer of questions related to great moral dilemmas.

At one point, the film takes us to a Berkeley classroom where students were discussing, “The Ones Who Walk Away from Omelas” (1973). The book’s premise is that the city can only live in happiness as long as one child is singled out for a lifetime of abuse in a dark underground room separated from society. The students were asked if they could save that child, which would upset the good life of the city, would they?

The individual vs. society is a classic anarchist argument and Le Guin knew the territory well. Reminiscing about “The Dispossessed” (1974), she asks, “What might a perfect society look like?” and quickly follows-up that it would be comprised of “non-violent anarchists.”

Issues of freedom, truth, morality, and gender intertwine in stark, dark, otherworldly environments, eerily parallel to the dark side of the human condition. We are in continual conflict, and it is that desire to solve this strange discomfort that propels Le Guin’s readers for liberation into an alternative universe.

Le Guin lets us explore other worlds and dimensions in our quest for self, meaning, and freedom. This magnificent documentary, resplendent in various visual reproductions of her environments, thrills Le Guin fans and makes new ones.

The US premiere of this intelligent, creative documentary is scheduled at the Northwest Film Center in Portland, Oregon, from Sept. 14 to 16. Its ground-breaking, expressive motion graphics reveal the backbone of an artist’s work and the interior of an artist’s mind.