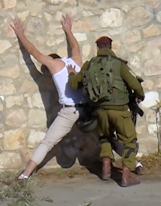 Blockades are randomly set up each day causing traffic chaos, children and adults are routinely apprehended and body searched, houses are ransacked and searched in the middle of the night without a warrant and without soldiers even knowing what they are looking for. Harrassment to cause “tension” occurs 24/7 to Palestinians in Hebron.

On the other hand, Israeli settlers can march with impunity through Palestinians neighborhoods singing “There is no Palestine. Israel’s our land and the Arabs are our dogs. Slaughter the Arabs!” phalanxed by protective Israeli soldiers. A Jewish settler reaches over and strips a Palestinian woman’s scarf from her head and screams, “Your eyes should be poked out!”

Six ex-Israeli soldiers report with unflinching detachment their duties to protect the Jews in Hebron, a town in the Palestinian West Bank. This is where the Tomb of the Patriarchs, Abraham and Sarah, Isaac and Rebecca, and Jacob and Leah, is located. As one ex-soldier explains, “Think about 850 Jews living in the middle of a Palestinian city.”

Being that many Israelis believe that “it is the right of every Jew to live in any part of the Land of Israel,” settlements in Palestinian areas are government protected, “specifically in Hebron the land of the Patriarchs.” How Israel supports the settlers and harasses the Palestinians is the subject of this film.

Last year Israel announced that more settlements will be built in Hebron to double the settler population. Since Hebron is a compact urban city, Palestinians had to be removed from the desired land to accommodate the plan. Security concerns justified the venture.

Each statement made by the ex-soldiers is backed up with film footage and photographs. The film project was co-funded by the European Union and the writer/director, Rona Segal, was an ex-soldier in the Israeli Forces herself.

As a matter of fact, Segal learned her film craft in the army where she served her mandatory service when she turned 18. She writes that “‘Mission: Hebron’ allows me to go back to those years in the army, but this time with a critical perspective – a perspective 18 year olds simply don’t have.”

Deservedly, “Mission Hebron” won Best Short Documentary at the 2020 Jerusalem Film Festival. It will have its US premiere at the American Film Institute (AFI) Doc Festival June 22-27.