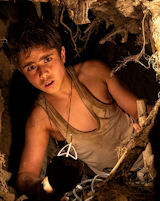 A 12-year-old boy and his friends are scurrying around the indoor parking garage in an upscale Iranian shopping center. Three are under the cars and one, far too young for his assignment, is on watch. The mission is to steal expensive wheels for their adult boss. The wheels are stolen to order, BMW, Mercedes, Porsche, cars that these boys can never hope to own. Whatever profit is made from the wheels they can never hope to see.

In the most powerful condemnation of child labor since Bahman Ghobadi’s “Turtles Can Fly,” director Majid Majidi paints a picture of hustle against all odds. In “Turtles,” Satellite commands his crew of children in clearing minefields in war torn Kurdistan on the Iraqi-Turkish border. Ali (Roohollah Zamani) runs this crew with 10 percent savvy and 90 percent fast running. Raising money to care for his seriously ill mother, Ali collects his pennies from vicious gangster Hashem who plucks kids from the street like flowers from a garden for his theft and drug business.

Co-written with Nima Javidi, the 2020 Venice award winner opens with one of many near misses, another failure to take home food money for the day. Hashim tells Ali of a buried treasure only accessible from a charity school for street boys, the Sun Children school. Forced to enroll, Ali and his pals are first rejected. They beg vice principal Rafie (great work by Javad Ezati) who gives in against his gut instinct. The caper is on.

What follows is a harrowing tale of tunnel building beneath a cemetery. Dirt is dug and transported in complete quiet and utmost secrecy. The cost of failure is death and failure comes in many ways. As the school is threatened with closure by the greedy landlord, Ali has to work fast in half flooded sewers that collapse to nearly drown him at every turn. Nobody in “The Great Escape” did it better. In a pitch perfect ending Ali succeeds against all odds in finding a treasure of an unexpected kind.

Working almost entirely with non-actors Majidi forges a movie on city streets, about city streets. The soundtrack is cars and trucks and the cinematography is cement, alleys and crumbling buildings hidden so deep in the hood that nobody can find them who has not lived in them. Those who live in them wish they did not. On the roof of Hashem’s buildings are his pigeons. Let loose to fly they always come back as freedom is only a good thing until one runs out of food. Hashem knows the boys will always come back.

Part of Ali’s crew are Afghans who live an even more tenuous existence as they will either be deported as criminals or deported for any reason whatsoever. The film is a statement about refugees as well as child labor. When everybody is a criminal there are no civil rights. In a last chance to fight the school’s closure the kids climb the walls in protest like the kids in Ladj Ly’s “Les Miserables” in yet another day’s victory that may not see the light of dawn. Ali’s fight to keep his Afghan friends, care for his mother and save the school may be too much for a child unless that child can become a man before his time. 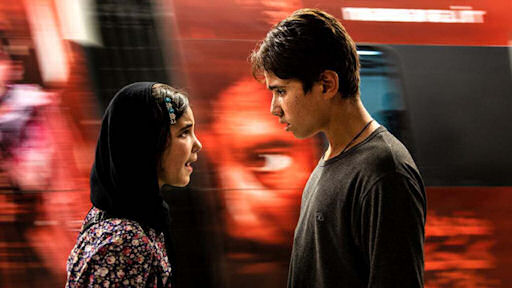