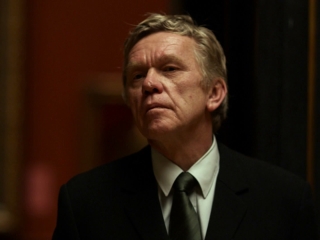 “What is it that you like about these paintings?” This is such a great question to ask. You have to step back and think, perhaps leading you to a surprising insight and appreciation inherent in the work and, further thinking about it, in your life.

Anne, a single older woman, played with whimsical charm and sweet shyness by Mary Margaret O’Hara, travels from Montreal to Vienna to tend to a relative in a coma. That’s the first metaphor. As she visits and sings to her cousin, she also visits the museum where she is noticed by a museum docent.

Johann, played by Bobby Sommer, is a pleasant-looking older docent who has been working for six years. He sits in front of a big wooden door that he describes as a fence or gate. Johann says simply that guarding these works of art has its tedium. On the other hand, each painting in the Brueghel Room always has something new for him. Sometimes it’s a new object or human he hadn’t noticed before.

Enter Anne from Montreal, our woman here to tend to her cousin, Janet. Before long Johann, the museum man, has given her a free pass to visit as often as she pleases. He also ventures out to show her the less expensive sights he enjoys in Vienna. But they stay distant.

Throughout this lovely film, real life — including the coma existence — is juxtaposed with the classic art in the museum. We do not miss one of the docents explaining that in some religious themed pieces she thinks the focus is actually on the peasant life surrounding the religious events. It’s the actual people living that predominate.

This is absolutely a great film to see — if not to get a little more experience with examining the great works of art, then to reflect a little on your own commitment to life. After watching the film flip the art question just a little and ask, “What is it that you like about your life?” Is there a parallel between what you love about certain works of art and the life you lead?