Writer/director Gabriel Mascaro has created a great film in “Neon Bull” (“Boi neon”). It is a movie with the breath-taking simplicity and courage of Charles Burnett’s “Killer of Sheep,” combined with the flabbergasting scope of “Mondo Kani.” It works on so many levels, it is perplexing to see how such frantic complexity can be presented with such beautiful cinematography and graceful patience. 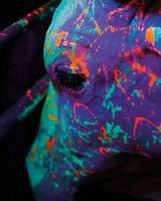 Juliano Cazarré plays Iremar, a self-described cowboy with class who performs the dirtiest and most demeaning job in what may be the dirtiest and most demeaning rodeo in Brazil. The “Vaquejadas” features a man on horseback collapsing a bull in full flight by a sharp lateral pull of the tail. This has been criticized as causing damage to the tail as well as fractures as the bull falls. Even putting that aside, it is an unusually brutal looking activity dealing with the least desirable (honorable?) part of the bull.

Iremar and his fellows live in the cattle truck with the bulls. Their life is either rubbing sand into the bulls’ tails or slapping the bulls’ faces away from the side of the crude pole-built chute. Along with Ze (Carlos Pessoa), they transport, house and feed the bulls, herd them into the chute and release them into the ring at the proper time. In doing this, they are subject to every bad thing a bull can do and share none of the glory of confronting the bull in the ring. This is the surface story; a man living a simple, if brutal, life but somehow having the peace of mind to dream.

The dream is the second story. Iremar is not only a natural-born cowboy, he is a gifted apparel designer. An odd mix indeed, and even stranger when he transforms the wonderland of an apparel factory into his love nest with the extremely pregnant night guard. The night guard shares a dead end job with Iremar, but she sells cologne on the side. He wades through the muck of a swampy, desolate dump site to collect the pieces of a female manikin. He saws them up and puts them together to make his dream come true. The carnal is continuously combined and contrasted with the spiritual.

The truck driver is Galega, an exotic dancer and mother of 12-year-old Cacá. Iremar makes costumes for her, each one more beautiful than the last. Early in the film, Galega is shown in a remarkably beautiful bit of creative dance, Gangnam style absurdity elevated to mythical proportions.

Like Iremar, Cacá has a dream. The world of these two works on a level completely apart from the world of the rest of the milieu. Despite these differences, there are interlocking loves and hates that bind them all into a family. Falling in bull dung, she cries that life may not have a happy ending. His reply, “Don’t listen to s—, it’s all lies,” may the best advice