Airplanes seem like a logical place for thriller movies, until one closely examines the challenges and limitations of filming and storyline. In my experience, it generally doesn’t work. There’s only so much set that can be used and the whole process feels confined and restricted. 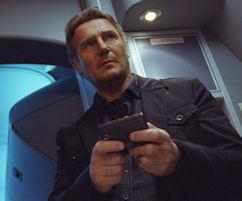 Considering my outlook on the subject, I was hesitant when I saw a trailer for “Non-Stop.” However, there was something about it that really hooked me in – perhaps the cast, or the visuals, maybe even the plot. Whatever it was, I was anxious to see the film. I wasn’t entirely wrong, come to find out.

At the core of “Non-Stop” is Bill Marks (played by Liam Neeson), who happens to be a US Air Marshall and is on an international flight to London. What transpires is a guessing game of “who sent it,” as in, some threatening text messages to Marks’ secured phone. The supporting cast includes Julianne Moore as passenger Jen Summers, and I just enjoy her very much. Her role embodies the term “supporting actress,” yes ma’am it does.

The storyline moves with fluidity and is never dull – semi-predictable, but never boring. Bill and Jen both have pasts that need revealing by the end of the film and I think the development of both characters was well planned and relevant. Moore and Neeson played well off of each other, definite on screen chemistry displayed.

“Non-Stop” is an action-thriller type, sort of. The action sequences are more dramatic sequences with anger driving them. It works for this film. The issues I have with “Non-Stop” go back to the inevitable confinement of filming on an airplane set. There are only so many rooms on a plane and the lavatory is sorely overused, with good reason of course, but too much loo because of lack of options. Business class, coach, the cockpit, and the bathroom, that’s it, that’s all there is to pick and choose from.

Was I on the edge of my seat? Not really. I wouldn’t nail this film down as a thriller, even though it has the aspects of that type of picture. Thriller elements are certainly seeded in the writing, which does add to the entertainment factor. Most people have been on a plane, that’s where the thrills come from, when you let your mind wander to the “what ifs” of flying. Given all the circumstantial variables, I think all in all this film accomplishes what it set out to do, entertain an audience for almost two hours.

There is no need to rush out to see “Non-Stop” in the theater, but I do recommend it for movie-goers who are headed to the cinema and can’t decide what to see. It’s fun, it’s entertaining and there’s really little point in picking apart a film that doesn’t have intentions of being a proper prestigious piece of art.

If you appreciate the actors and enjoy just sitting back and going on an illogical ride with a few friends, then this movie is geared toward you. There’s even a few laughs snuck in to keep the story alive and flowing. Check it out if time and money allow, and just sit back, relax and enjoy. 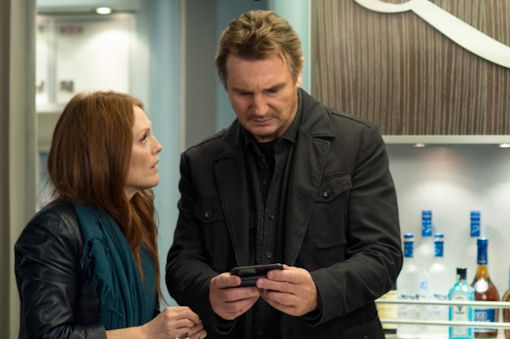 Directed by Jaume Collet-Serra, “Non-Stop” is rated PG-13 and is now playing in theaters everywhere.