While there have been many situations and tragedies that have shocked and impacted the American people over the years, if the events in “Olympus Has Fallen” were to actually occur, it would be an unbelievable tragedy that would have repercussions in the American psyche for years to come.

Luckily for us, it is just an action film, directed by Antoine Fuqua (“Training Day,” “Shooter”) and starring Gerard Butler as an ex-Secret Service Agent who saves the day. Can this film — which is basically “Die Hard” in the White House — impress fans and critics more than the recent “A Good Day to Die Hard” did? Read on and find out.

Mike Banning (Butler) is not only on the personal protection detail of President Ben Asher (Aaron Eckhart), but is also a trusted friend of the family and a mentor to the President’s son Connor (Finley Jacobsen). When a tragedy strikes and he is pulled from his duty and assigned a desk job, he thinks the exciting life he loves is now over. That is until a group of rogue North Korean terrorists infiltrate the White House, kill all the Secret Service Agents and cops tasked with protecting the buildingm, and somehow manage to lock themselves in the President’s secure bunker along with the President, Vice President and Secretary of Defense.

Mike manages to slip into the building before all communication is blocked and starts talking to Speaker Trumbull (Morgan Freeman), now the acting President, and Director of Secret Service Lynn Jacobs (Angela Bassett). As a lone assailant, he must take on squadrons of goons and find his way to the President before the terrorist leader Kang (Rick Yune) starts executing all of the top level executives.

Armed only with his experience and highly-trained killing skills, Mike will have to sneak through the now desolated building in order to make his way to the secure bunker. With capabilities to launch nuclear weapons from the impregnable underground fortress and all the password holders being held hostage, can they hold out until Mike arrivea?

Gerard Butler is known for his skills in action movies and has even wandered into the romantic comedy genre as of late, but he is at his best when kicking some butt. I think that he was well cast in the movie and it plays to his strengths well. While it is more than just a generic rip-off of “Die Hard,” it still holds pretty true to the same formula you tend to see in these one-man-battles-an-entire-army films. While it is a tad predictable to the cinematically savvy moviegoer, it doesn’t diminish the fun of the movie. It moves at a steady pace and the original assault on the White House is an extremely tense 20-minute scene that seems to play out in real time.

Butler is the star of this film, but that didn’t stop the film-makers from bringing in some talented actors to play all of these smaller roles — including Dylan McDermott who has a fun role that I won’t surprise for you. The people responsible for the movie said that they did research and if there were to be a raid on the White House, they say this is one possible scenario that could play out and that fact is frightening.

I did think that some of the special effects seemed a bit subpar for such a major release, but this is only noticeable in a few scenes. Besides that, and a few questionable plot holes, this film, much like “Jack Reacher,” is meant to entertain and keep you on the edge of your seat — which it does.

If you are looking for an action-packed movie that you can just relax and enjoy, then this may be the film for you. I did find faults in some of the logic in the movie — if the bunker is so secure, then how do the bad guys come in and out of it to hunt down Mike once they are aware of his presence — but that may be just me over-examining small details. I will say that this movie is thankfully rated R because I am sick of action movies where people are killed left and right and they never show any blood or gore to keep the PG-13 rating. “Olympus Has Fallen” keeps the reality and makes the amazing feats performed by one highly-trained individual grounded in realism, and therefore more believable.

I can certainly see this movie not being everyone’s cup of tea, but fans of this genre should enjoy it. So head to your local movie theater and watch it today. 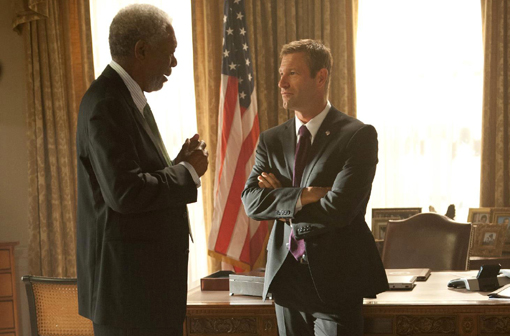