Review: On Her Shoulders

Since 2014, Nadia has had only two wishes. The first is to return to her small town. The second is to get justice. If her first wish is granted, she would be returning to a town with no men. The second has put a price on her head. 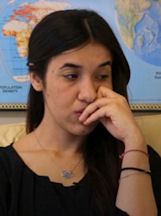 “On Her Shoulders” is a documentary on the 2018 Nobel Peace Prize winner Nadia Murad. In 2014 Nadia was living a normal, modest life with her brothers and sisters in Kojo. But one day extremists from ISIL (Islamic State in Iraq and the Levant) invaded and shot the elderly, men, boys, and babies.

Nadia, at 21, along with all the other Yazidi girls, was taken prisoner. She witnessed the degradation of her best friends, cousins and girls much younger than herself.

She is continually asked the lurid details of her sexual abuse. What was it like? The interviewers apologize as they ask her to repeat the details already on record. In an aside, she despairingly tells the camera that they are asking the wrong questions. Then she explains what she wants them to ask.

Nadia is a Yazidi with a tattoo in the center of her chin. Her town, Kojo, is a small Yazidi village in northern Iraq. Her monotheistic religion has ancient Zoroastrian, Judeo-Christian, and Islamic similarities, but is basically a separate, distinct, exclusive faith that allows marriage only within the religion. Converts to their faith are not accepted.

Though Nadia eventually escaped from her bondage, she is obsessed with saving the others. But how?

Alexandria Bombach, director, cinematographer, and editor, sensitively orchestrates this haunting documentary with a subtly delicate score by Patrick Johnson. Bombach’s approach captures the essence of Nadia, who has no family pictures or friends or relatives to interview. Her camera’s eye exposes Nadia’s aloneness, her blank stare, her listless regard for herself as she softly says, “I am worthless.”

Nadia’s second wish is for justice. She wants her abductors to be held accountable. Amal Clooney, lawyer for the International World Court in the Hague, has taken on her case and is preparing to prosecute the ISIS commanders responsible for crimes against the Yazidi community.

On Oct. 5, two weeks before the wide-release premiere of “On Her Shoulders,” the 2018 Nobel Peace Prize was awarded to Nadia Murad and Dr. Denis Mukwege “for their efforts to end the use of sexual violence as a weapon of war and armed conflict” (The Norwegian Nobel Committee).