Review: A Bread Factory, Part One

The Bread Factory is a small-town experimental community art center in trouble. But it is only a microcosm of a greater danger that has invaded a town being hoodwinked by corruption on the city board and infiltrated by forces indifferent to the community good. The galvanizing dynamite in this mix is fired by the performance of Tyne Daly and the direction of Patrick Wang. 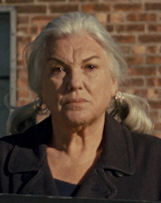 Daly, a four-time Emmy award-winner for her role as the righteous police detective in “Cagney and Lacey,” brings home the bacon in this unconventional Wang creation. Scenes are initially short, seemingly even disconnected except for appearances of Daly, who carries this interesting two-hour tour de force into ground-breaking artistry. Her famous lowered head with arched eyebrow tells a story words would only diminish.

Daly’s character knows she’s dealing with snakes and the most repugnant has the most power. Like a charmer, Daly’s presence fuses each seemingly discrete scene into Patrick Wang’s web of truth. We identify with her fight for moral victory.

The prime mastermind of this fascinating approach to storytelling is Patrick Wang (“In the Family”), a multi-talented, handsome, brilliant MIT economic major who wrote and directed this rich feast of dramatic excellence.

How much the film reflects politics, corruption, and oppression at all levels of the human experience is up to the viewer to discern. But Patrick Wang is a genius and this film is worth viewing two or three times. Wang remarked in a personal interview that the short scenes that march in and out at the beginning, “show the connection of struggle across time and place… ‘A Bread Factory’ is one particular story of struggle, but it is of a piece with many, many others.”

On the surface, “The Bread Factory, Part I” is based on the real circumstances of a New York State farm town and their wrestle with art funding. Tyne Daly, now Phyllis the bartender on CBS’s “Murphy Brown,” and the magnificent Elisabeth Henry play the roles of the real-life founders in Hudson (renamed Checkford).

Each scene is created with ensemble virtuosity, like mini-instrumental performances, but it’s Daly who keeps the screen popping like sparklers. Her expressions, questioning the improbable, and her voice inflection, expressing frustration at the depth of human of human duplicity, are priceless moments.