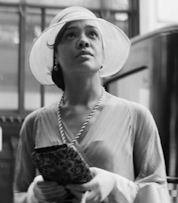 “All of us are just passing for something or other, aren’t we?” Irene muses rhetorically. As the crack in her ceiling spreads out, the howling wind gets stronger and snow begins to fall. The exquisite cinematography enhances this important story about race and identity.

Irene has two sides. At once beautiful and married to a successful doctor, she seems to have it all, including a housekeeper/cook and two straight-arrow handsome young boys. But on a free day she covers her hair and sits hesitantly in a fancy restaurant for tea as a White patron. There she coincidentally reunites with blond-haired Clare who is full of bravado and self-confidence.

Irene (Tessa Lynn Thompson), called Renie, is a beautiful light-skinned Black woman and Clare (Ruth Negga), with her narrow chin and doe-like eyes, is a still lighter Black woman who is secretly passing for White. The year is 1929 and Clare’s unsuspecting husband is an outspoken Black-hater.

What’s wrong with Renie is reflected by Clare who has passed into the White world. Clare is the ghost who haunts Renie, stealing her ability to love herself or anyone else. However, though Clare also seems to have what she wants, wealth and access to a White world, ironically she longs for her Black community.

As Renie’s discontent grows, Clare infiltrates her home and family. Clare is paradoxically happy, playful and self-confident in the Black world she has rejected. There she feels free and safe. But by consorting with Renie and her family she also risks exposing her true identity.

A core universal message in “Passing” is the challenge of accepting and loving our own individual selves. In Renie’s case, her dissatisfaction permeates her life and creates a schism between all whom she loves. To quote anti-racist historian, Ibram X. Kendi, “The only thing wrong with Black people is that we think something is wrong with Black people” (Stamped from the Beginning: The Definitive History of Racist Ideas in America).

Actresses Tessa Thompson and Ruth Negga, director Rebecca Hall, and the writer of the novel upon which “Passing” is based, Nella Larsen, are all accomplished, beautiful, mixed-race women who walk in a complicated dual reality imposed by American society.

Nella Larsen’s book, upon which “Passing” is based, was published in America in 1929, the same year as the action in the film. Larsen’s mother was Danish and her father was Afro-Caribbean. As American author and essayist Darryl Pinckney has written, “No matter what situation Larsen found herself in, racial irony of one kind or another invariably wrapped itself around her.” This can also be said of the lovely protagonists revealed on screen.

“Passing” bravely investigates the Black psyche and the duality of racial experience in America in this beautifully crafted piece on race and identity. 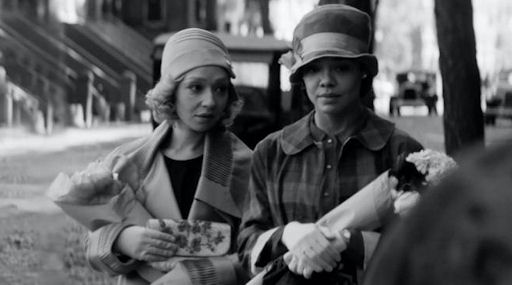