Review: Out of the Blue 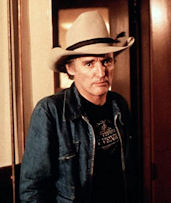 In preparation for viewing director Dennis Hopper’s “Out of the Blue,” I re-watched his seminal picture, “Easy Rider,” which I’d not seen since its theatrical release in 1969. The reason for this was Hopper’s own description of “Out of the Blue” as being what might have become of the protagonists of “Easy Rider” 10 years later. Right on, Dennis, at least for your character “Billy” in the earlier movie.

For those of you who, like me, don’t recall the characterizations of the three principals in “Easy Rider,” there is: Wyatt (Peter Fonda), a thoughtful, idealistic man looking for an easy-money way to accomplish his version of the American dream; Billy (Dennis Hopper), his partner and earthier seeker of the same dream; and George (Jack Nicholson), an alcoholic rich boy looking for the adventure his life lacks. All three meet brutal ends at the hands of rural southern men threatened by the very existence of these free spirits.

Now imagine that Billy had not died in 1969, but rather went on to become a truck driver named Don Barnes (Dennis Hopper), married to the unstable Kathy (Sharon Farrell) and father of his own wild spirit in the form of daughter Cebe (Linda Manz).

The story opens with Don driving his truck down the road with Cebe, in clown costume, riding along. He is drinking bourbon while joking around with Cebe. Ahead lies disaster in the form, as usual, of multiple failures. Don is drinking, inattentive, there is an intersection ahead, and the local school bus full of kids has stalled in the middle of that intersection. You can imagine the horrible result.

Don ends up in prison for five years, addict Kathy is shooting up with any man eager to take sexual advantage, and Cebe is raising herself. All this is done to a soundtrack of Elvis Presley, Cebe’s musical idol, and others. Outwardly Cebe is a tough little cookie, but her thumb-sucking and stuffed animal reveal the insecure girl within.

Early on, there is a touching scene where Kathy and Cebe visit Don in prison, shortly before his release. He seems very eager to see them but is ashamed for Cebe to see him there. He even sends them away after only a few minutes, and then, when they are gone, begins weeping. Sadly, such remorse is short-lived once he is free.

In Hopper’s first film, we were shown a dream in the process of being fulfilled, unspoiled wide-open spaces filled with blue skies and sun, and the freedom of the open road. It was illusory, but it was beautiful. The Dennis Hopper of 11 years later gives us a very different if perhaps derivative story. The skies of Vancouver, Canada are dreary, and the streets are mean. The locals are either brutish or victims.

We are subjected to the remorseless decline of each member of the Barnes family, excruciatingly depicted by the three excellent principal actors. The film couldn’t find a releasing company for the US market when it first came out, being viewed as too bleak. Yes, it is bleak indeed, but also accurately depicts a desperately sad segment of that American market. In the years that have followed, it’s nihilistic themes of disillusion, despair and disintegration have only become more evident as family dysfunction, drug abuse and societal estrangement have taken their toll.

The curious title comes from a line in Neil Young’s “My, My, Hey Hey.”. It is “Out of the blue and into the black.” Director Hopper chose the first four words as the title of his movie, but the last four words certainly describe the decent into familial horror that he depicts.

As a side note, actor Raymond Burr plays a sympathetic psychiatrist trying to help Cebe. This was long after his success as “Perry Mason” and “Ironside,” and the performance is without the bombast Burr is noted for. It’s a very small part, and Burr is wasted in it. This film had a very rocky beginning before Hopper took over, and it may be that the Burr part was either greatly reduced, or that his two scenes were the only material to survive the original filming.

An excellent film, but not for those hoping for an uplifting message or a last minute happy ending. Why excellent, considering the subject? Exactly for that reason. It intelligently explores the collapse of this small family through writing, acting, and cinematography, with a soundtrack of the time. 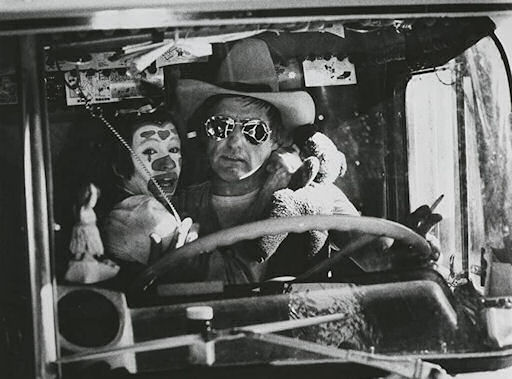 Songs/Soundtrack
“My My, Hey Hey (Out of the Blue)”
Written by Neil Young and Jeff Blackburn
Performed by Neil Young

“What Have I Been Drinkin’”
by Powder Blues Band