Yasmin stands on the cement walkway at a sea port in Athens with her four children. They are chasing a balloon and each other. She carefully monitors them and then herds them into their tent under the freeway overpass. Here she gets out her cell phone and lets them see pictures of their prior life in Syria. She cries and they are all still. “When it is safe we will go back home,” she says gently.

Her children, aged nine, seven, six and five, have no school to attend. They are simply in a tent among other tents under the Greek freeway. They arrived by boat with the intent to reunify with her husband who left Syria earlier to forge the path. He is awaiting paperwork in Germany so that they can join him there.

Megan Mylan, an Oscar-winning filmmaker, took five years in five countries to create this cinéma-vérité documentary masterpiece on what it’s like to be a refugee. Filmed in Turkey, Greece, Germany, Syria and the US, Mylan captures the tortured lives of four families who are victims of the Syrian Civil War. The footage is impressive in its candor and emotional depth.

The documentary is divided into five stories. The second takes place in Turkey and is about a single mother with five children. Her husband used to run a shop but was arrested. She now is transported daily to back-breaking work in the fields. Since she is gone all day her 12-year-old son takes care of the children. She knows the only way they can be properly taken care of and receive schooling is to register them in an orphanage.

The third story is just as wrenching. The father has brought his son, who had his leg blown off in a blast in Syria, to the US. Here he is waiting for his asylum status. However, since he once fought for the rebels against the Syrian government, the US considers him a terrorist. Maybe his son can get asylum, but he cannot.

Each story has three things in common. The first is that they each have access and dependence on their cell phones. The phones provide the foundational link that gives them hope and keeps them connected. The second is that they have been waiting in agony for news. Will their family ever be united? Will they be torn apart? The third is that it is family, being together, that is most desperately important. Yet in each country they are challenged and frightened that their dream will be thwarted.

It seems so simple to the viewer that these people should never have been separated. In all cases, like the woman with the orphanage option, it is more expensive and inhumane to keep them apart. 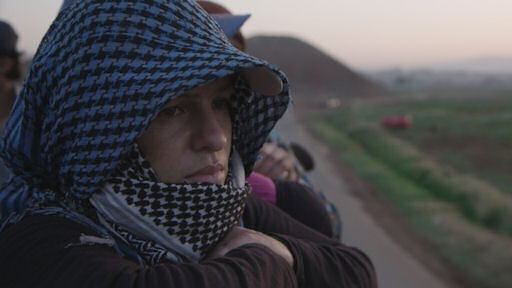 “Simple as Water,” destined for the Oscar Short List, premiered on HBO and HBO Max Nov. 16.