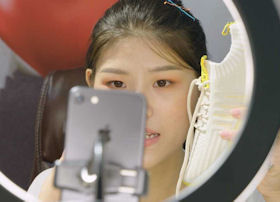 If you were going to create a successful capitalist nation from scratch, which would come first, smile training or sex dolls? Such appears to be the choice in China as the productivity behemoth groans and stretches through its growing pains as a developed economy. As told in this fascinating documentary, success as a capitalist economy depends a lot on copying, well, capitalist economies. As in most other things the authoritarian government executes this with discipline, repetitive training and a lot of esprit de corps China style, otherwise known as propaganda.

The film screened at the 2021 DOC NYC film festival, produced and presented by IFC Center, Nov. 10 to 18 at IFC Center, SVA Theatre and Cinépolis Chelsea and continues online until Nov. 28.

There is plenty of technology for the technocrats in the audience even as director Jessica Kingdon emphasizes what technology has cost us, more than what it has given. The mountain of discarded electric bikes has made the rounds before as “bikes without responsibility” is being decried in China as a big mistake. As funny as that may be, the incredible mountains of plastic are downright scary. Yup, the same thing could be filmed in the USA. That makes it even scarier.

Although factories are bustling the workers look depressed. The millions of available jobs are the worst imaginable outside of lethal hazard. If a worker could be bored to death, spending all day assembling hairspray spring valves would do the job. Then again there is the good side. Luxurious and stimulating Disneyland style resorts and gourmet food and wine in richly appointed digs. As Frank Zappa said, “TV dinner by the pool, I’m so glad I finished school!”

Unabashedly critical if not damning, the screenplay is rich in visual content while teetering dangerously close to the dogma it tries to condemn. Some are rich and some are poor as they always have been. Even so, the so-called free market has a way of widening that gap and sharpening the distinction. The glamorous model in the field for the shoot complains of the heat while promoting limitless consumption without practical purpose while the groundskeeper pulls weeds for a single digit fraction of the pay. Is that an example of correct social mores?

Skillful cinematography, at one point echoing Nikolaus Geyrhalter’s “Earth” (2019) with those fantastic giant excavating machines, conveys the excitement and pride of accomplishment of mechanized society while at the same time gnawing at the backs of our minds with the anxiety of unintended consequences. Things are getting worse in some ways and there always seems to be a need for more security. The solution of aggressive yet scientific weapons and martial arts training seems to go well with the sex dolls if not with the practiced smiles.

Alienation may well be the first effect of sudden wealth. Separate the classes and then pit them against each other as the world burns to the profit of the corporations. An updated “Koyaanisqatsi” (1982) focused on China as the Petrie dish might reflect in the mirror to be alarmingly like us.