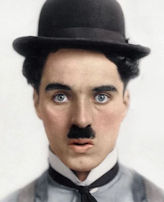 The great irony is that Charlie Chaplin and his films were received enthusiastically and sympathetically before WWII and as communistic and unpatriotic after. Initially wildly popular throughout the world, “The Real Charlie Chaplin” details the man behind his characterization of The Tramp; how he lived his life and how he came to be exiled from the US.

From about 1914 to 1941, Charlie Chaplin was the most famous and beloved man in the world. His comedic character, The Tramp, epitomized the little guy, the man who had good intentions but kept losing anyway. During The Great Depression, Chaplin’s clever characterizations using satire and slapstick brought laughter to a sad situation. Chaplin mocked big business and authority and showed how the little guy, the unemployed or the entry-level worker, always got the short stick. By 1941, he took on Hitler in “The Little Dictator,” his most insightful film.

How did Charlie Chaplin’s development of The Tramp become such a beloved character? Chaplin was in competition with other men who had the same concept. But what made Chaplin’s unassuming Tramp the most popular and famous? What made Chaplin himself the most popular actor in the world? What was his private life like – a good husband and father? And what brought him crashing down?

Writers Oliver Kindeberg, Peter Middleton and James Spinney have done their homework. Using archival footage of London in the early 1900s and the poverty of The Great Depression in the 1930s, the filmmakers also had “unprecedented access” to Chaplin’s films, starting with his silent work in 1914. Along with home movies, private photographs, and interviews, they have fleshed out a remarkably full portrait of a multi-dimensional creative artist.

Aspects of Chaplin’s life, from the loss of his parents to his relationships with women, will surprise many. While Hedda Hopper and her collusion with FBI Director Edgar Hoover to bring Chaplin down is more revealing about the times than Chaplin, selected excerpts from interviews with Chaplin and family members are illuminative.

“The Real Charlie Chaplin” provides remarkable revelations about a remarkable actor. The outstanding research and editing, beginning with his birth in 1889, that make this documentary flow will land this film as a major contender for best doc on the 2022 Academy Award short list.