You gotta love Mark Wahlberg as a bad boy cop. He reprises his role from “The Departed” with aplomb as sergeant Tommy Saunders of the Boston PD. He is on probation for some unstated breech of cop protocol, probably having to do with mouthing off, and has a bad knee. When two bombers set off bombs at the Boston Marathon, he has a chance to do the right thing, although in doing it his life will never be the same. 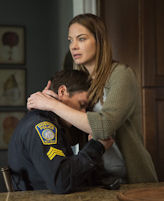 This story of the bombing and the subsequent urban manhunt may be the best one yet from director Peter Berg, who has a long list of action-thriller hits. He is helped by a dream cast, including John Goodman in a bang-up role as police commissioner, Michelle Monaghan as Saunders’ wife and J.K. Simmons as the local police sergeant.

The bombers play a crucial role in the movie and the screenwriters resist the temptation to show them as simple brutes like the “Die Hard” bad guys. Instead, they do a good job of showing them as human beings rather than brainless monsters. Alex Wolff and Themo Melikidze get a big share of the screen time playing the brothers Dzhokhar and Tamerlan Tsarnaev. As self-appointed jihadists, they jinn up pipe bombs in defense of an undefined religious/political agenda. As it turns out, Tommy Saunders is looking for answers as well, and is nearly as uncomfortable in his skin as are the obsessed killers.

The story covers the brothers’ home life and devotes ample time to the wife and daughter who will live the rest of their lives with the acts of the two. Although the three MIT students who reported helped them are mentioned, they have little impact on the overall tremendous tension of the movie.

If you think this movie looks well produced, it’s because of the two dozen producers and excellent editing back and forth between security camera footage and real time narrative. The behind the scenes look at the work of the FBI and BPD is astonishing. It looks extremely realistic. Some Hollywood license here and there? No doubt. But it comes across as pitch perfect and there is almost never a dull moment.

A great soundtrack by the Oscar-winning team of Trent Reznor and Atticus Ross (“The Social Network”) keeps perfect pace with the rising tension as the police home in on the suspects, experience a horrific bombardment of homemade bombs, and close in for the finish. Cinematographer Tobias A. Schliessler rejoins director Berg after teaming up on the thriller “Lone Survivor,” one of the few recent films that matches this one for sustained nail-biting action. Rounding out the team are editors Gabriel Fleming from “Deepwater Horizon” and Colby Parker Jr., who also did the editing for “Lone Survivor.”

The highest octane per screen minute goes to primetime Emmy-nominated Khandi Alexander as the CIA/NSA interrogator you really do not want to meet at a police station. 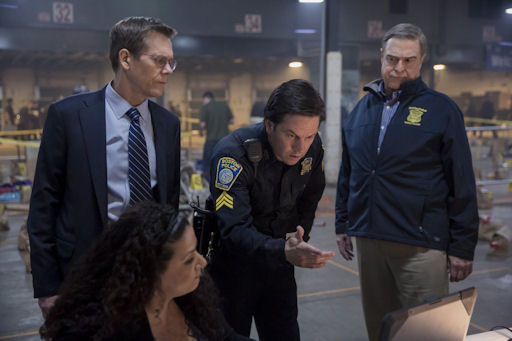