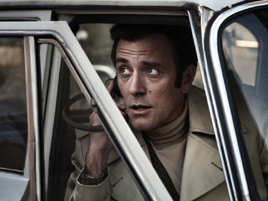 It is 1969 and conspiracies are everywhere. In America students in every college across the land are protesting the Viet Nam war, racial injustice and political corruption of all kinds. The cold war is heating up to fever pitch as the USA and the USSR rattle sabers all over the world for bragging rights to call a country theirs. Caught in the middle of this war of words, and sometimes bullets, is Italy.

Claiming one of the world’s major economies and a strategic position that made it the Allie’s WWII foothold to invade Hitler’s Europe, Italy became a desirable prize in the war of socialism against right wing conservatism. The USA was not intent on installing fascism, but they were not going to let socialism gain control of Italy, either.

Filmed in Milan and Turin, director Marco Tullio Giordana’s simmering mystery thriller “Romanzo di una strage” (aka “Piazza Fontana: The Italian Conspiracy”) is as dark as a film noir can be. The ancient pot-holed streets shimmer in the dim, vaporous streetlights as dark figures duck in and out of allies and doorways. The exchange of wordless signals and cryptic messages is broken only by the occasional clipped cry of a victim falling from a fourth floor window, to his death.

The death of Giuseppe Pinelli (played by Pierfrancesco Favino), a 41-year-old anarchist railway worker, was caused by a fall out of the window of a police station where he was being interrogated for the Piazza Fontana bombing. The bombing was a terrorist attack that occurred in the early morning of Dec. 12, 1969, and destroyed a large part of the National Agrarian Bank in Piazza Fontana. The bombing killed seventeen people and wounded eighty eight. The same day three more bombs exploded in Rome and Milan and another was found undetonated.

Initially attributed to anarchists, over 80 arrests were made for the Agrarian Bank bombing. It was widely suspected that Pinelli, an influential member of the anarchist movement, was thrown out the window by police to send a message to his anarchist pals. Murder charges were brought against Luigi Calabresi (1937–1972, played by Valerio Mastandrea), one of the officers on duty, and other police officials, but they were dropped in the midst of intense political pressure. Calabresi was murdered by left-wing militants in revenge in 1972. What followed was a morass of charges and counter charges. 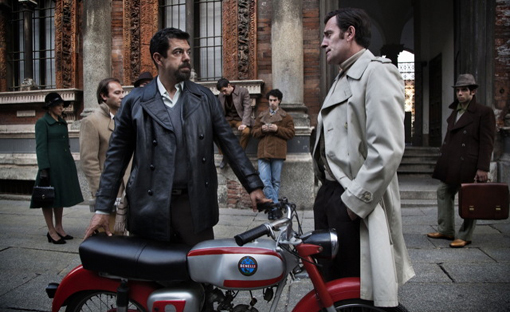 As history would have it, the bombing may have not been a vicious strike by anarchists, at all, but a cold and brutal firebreak executed by rightest politicos with ties to the USA spook force. In 1972, the far-right Neo-fascist organization Ordine Nuovo, founded by Pino Rauti, came under suspicion and key members were charged with planning 1969 attacks at the Trade Fair and Railway Station in Milan, and the bombings of several trains before they carried out the Piazza Fontana bombing. They were acquitted in a trial that satisfied nobody.

As it turns out, the composition of the bombs used in Piazza Fontana was military in nature. It was a type of explosive that is nearly impossible for citizens to obtain. Besides, it was identical to that of the explosives that Ventura hid in a friend’s home a few days after the attacks.

The film starts with the 50 appliance timers bought by Franco Freda in Bologna, who later explained that he bought the timers for the Algerian secret services, although no such trail can be even partially verified. After running away, Freda was pronounced guilty in absentia for the Piazza Fontana bombing, and the court sentenced him to life imprisonment. As late as 2001 Italian right wing Ordine Nuovo members were all convicted, but their convictions were overturned in March 2004.

If there is any lesson to be learned from this complex and mysterious real-life spy thriller, it is to trust no one. First impressions are often deceiving. Just as much to the point, the convoluted and time-sensitive answers to this deeply hidden secret would never come to light if the perpetrators were executed. Although the death sentence is widely heralded as justifiable closure, it also closes the book on the light of day.

In the final analysis, the best way to achieve long term justice might be to force all perpetrators, no matter how heinous, to live out their lives in prison. Eventually, their truths might come to light. 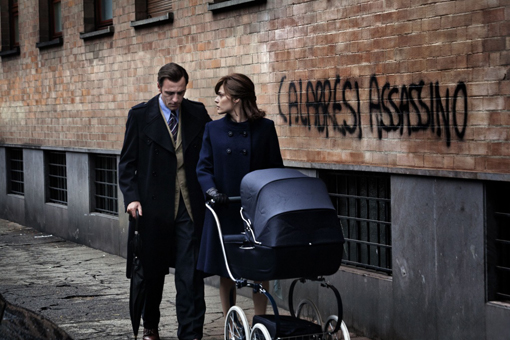