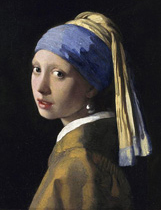 Produced by Teller’s stage partner Penn Jillette and Farley Ziegler, the film follows Tim Jenison, a Texas based inventor, as he attempts to solve one of the greatest mysteries in all of art: How did 17th century Dutch Master Johannes Vermeer (“Girl with a Pearl Earring,” shown at right) manage to paint so photo-realistically, 150 years before the invention of photography? Jenison’s epic research project ultimately succeeds as he uses 17th century technology — lenses and mirrors — to develop a technique that might have been used by Vermeer, supporting a theory as extraordinary as what he discovers.

Spanning a decade, Jenison’s adventure takes him to Delft, Holland, where Vermeer painted his masterpieces; on a pilgrimage to the North coast of Yorkshire to meet artist David Hockney, and eventually even to Buckingham Palace, to see the Queen’s Vermeer.

“My buddy, Tim Jenison, told me over supper he was going to try to paint a Vermeer. Tim is a genius, but I’m a skeptic. I wanted to see him do it,” Jillette said. “Teller has been the Penn & Teller de facto director since our beginnings so we made a movie of Tim’s whole monomaniacal trip. Having Sony Pictures Classics as the first words on the screen means it’s more than just a couple of Vegas magicians and an eccentric inventor in his garage — now, it’s a real film that will change the history of art.”