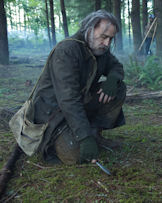 Robin Feld (Nicolas Cage) and his delightful hairy pig are living in a rustic cabin in the Mt. Hood forest where bushy ferns and moist dirt hide truffles that grow in the root systems of the tall Douglas fir trees. Oregon truffles can sell for $600 to 5,000 a pound. Dogs and pigs, like Feld’s, can be trained to find them.

After the first idyllic minutes of self-sufficiency in this rich, hidden forest location, where man and pig live in harmony harvesting and selling truffles, there occurs one surprise after another and a deepening puzzle. The cabin is assaulted, the pig is taken, and Feld finds himself knocked out on the floor with a bloody head. After he regains consciousness he rises to rescue his pig.

Since I live in the Portland area where “Pig” was filmed, it was with some interest to see Feld end up in Portland’s underground Shanghai Tunnel system. Dating back to the 1850s, these tunnels led from businesses in the Asian center to the Willamette River. Shippers could transport their cargoes underground to storage basements to avoid the expense and congestion of travel on the street. Rumors abound with stories of kidnapping, opium dens, and prostitution in these dank underground routes.

Feld soon shows up in one of these tunnels for a fight. It looks like restaurant and hotel service workers, mostly male, are the only ones who congregate here in an odd kind of Fight Club.

That initial summary is a literal report. However, the pig is a symbol of something far greater, as is Feld. What can we do when something precious, something we love, is taken away? What journey do we take? And what Judas will be part of our challenge?

Cage is at his best. He does an exceptional, low-key caricature of Robin Feld, a tormented man who, like the rest of us, is not in control. Expanding to his past as a world-class renowned chef, Cage shows us that there is more to Feld than we figured.

There is confusion underground, confusion about why the pig was stolen, and confusion about a woman who lives with 24/7 care. But Cage’s under-played portrayal of the rise of Robin Feld, a man in multiple grief, is worth the price of admission.