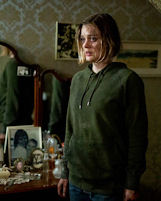 Mom walked away and daughter and grand daughter Kay and Sam are as miffed as they are concerned. We all have to go away to some care center or other as we get older and start forgetting things. As it turns out, young people forget things, too. Like old people. In this case grandma Edna has a couple tricks up her sleeve that the kids will not soon forget. Walls move, rooms shrink and kids snooping in the wrong places can find their options diminishing. Just like grandma.

Writer/director Natalie Erika James uncorks a good one for her feature debut. Even better, she skillfully samples a few effects from the guy who knows, Stanley Kubrick. The dense forest and exaggerated isolation threaten to swallow the grand old house that has seen better days. Haunted? Of course, or what would we do for a scary movie? All the scarier because this haunting lacks gallons of gore. It is a haunting of connections lost. Families torn apart not by taboo violence, rather drifting apart to grab the gold rings of the carnal world.

Edna (Robyn Nevin) vanishes, commands the kids (Emily Mortimer and Bella Heathcote) to come, spawns a search, then reappears out of nowhere to make tea. This pattern repeats half successfully throughout the movie as dreams mix with reality. This does not strengthen the story, thin in places as it is, forcing the audience to suspend disbelief whether they like it or not. Great work for a debut could have been better with a dramatic back story that sets the two girls off and running. As it is, we all come up to speed slowly.

Skillful cinematography makes a lot out of a little coupled with a minimalist soundtrack and blessedly few jump scares. The film would be improved by deleting the few included, apparently in moments of weakness. Perhaps a producer demanded them. The opening shot of Edna, complete with bathrobe and wonderful tinder dry, dead, grey hair, shoots us to “Psycho” and we love it. Creaky, shaky wooden spiral staircases threaten to throw us to the ground, shattered, like the brittle bones lying abandoned next to the bed. The attic with the disappearing doors, confusing dead ends and suffocating shrinking walls does not simply kill, it kills and then digests, a python of a haunted house. Hitchcock never came up with that.

Post-it notes remind Edna of her daily routine and remind us that she is losing touch. They also remind her progeny of their failures to share her life. Our vaunted intellect goes the way of our flesh and, it appears, the way of our husbands. This story’s men are the uniformly friendly and inept sheriff, doctor and dad next door, realists out of their league. Oh, and a forbear in a tiny predecessor cabin who gave everyone a break by dying a miserable and lonely death. Or was that grandma Edna? Hard to tell with the time-shifting nightmares and all.

What an ending. So creatively horrific as the rotting, peeling skin horror cliché morphs into the Kubrick moment. Carnal corruption assembles itself into a timeless feminist bond, a frieze in relief of human connection. Kubrick never came up with that.