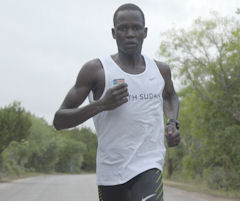 Guor Mading Maker (aka Guor Marial) went from scavenging nuts and mangoes to survive at age 8 or 9 in Northern Sudan to becoming an American college graduate and Olympic marathon runner. This is a true, inspiring story of what America, at her best, can do for people in the world.

In 1993, Guor was living in a conflicted oil area in Sudan. His early childhood had been spent running to hide in the bushes when the enemies came. Finally, after his family had to survive on their own for three weeks in a forest, they cast out their 8-year-old son, pointing him down the dirt road towards North Sudan. For four years he wandered.

Upon reflection, he can see that his parents pushed him away because it was the only way to give him a chance to survive. By the end of the warfare in Sudan, 8 of his 9 siblings had been killed and 28 of his relatives. The story of his wanderings, his smashed front teeth, his encounter with kidnappers, and other challenges and surprising gifts, are told through animations and a fine musical score that builds on the story throughout the film.

Bill Gallagher, the director, producer, and editor, is relatively new to the scene. “Runner,” filmed over seven years, is his directorial debut for a full-length film. In a FB interview, he states, “We all have hard things we’ve gone through. … The power of Guor’s story is that we have a choice. We can let that oppression, trauma, and pain consume us or we can let it propel us to something positive.”

“Runner” continues Guor’s story with Gallagher’s documentary filming and additional tv footage to tell about Guor’s absolutely mindboggling, transformative relocation into a New Hampshire high school, including his rise to fame, his patriotism for South Sudan, his visit back home to see his shocked parents. Gallagher ends this miraculous story to show Guor’s choice of a career and his determined mission.

“Runner” has won nine film festival awards, including Best of Fest, Best Documentary, and Best Human Spirit. Its premiere was timed to coincide with World Refugee Day, June 20. A share of the proceeds benefitted refugee organizations, marathons, and running groups.

Gallagher has teamed with significant charities to present “Runner.” You can choose from a list to watch the film. Simply go to www.runnerdoc.com/#watch-section and click on an organization to see the film and invest in a worthy cause at the same time.