Review: Rise of the Guardians

If you thought that Marvel’s “The Avengers” would be the only hero team-up film you would be seeing hitting the big screen this year, think again. Shifting from comic book heroes to fairy tales is the DreamWorks animated film “Rise of the Guardians,” which shows us that Santa Claus, the Easter bunny, the Sandman, the Tooth Fairy and Jack Frost are more than holiday mascots, they work together to provide the children of the world joy and happiness and protect them from harm.

But when an ancient evil arises once again, they must combine forces and rise to demolish it. Based on the book series “The Guardians of Childhood” by William Joyce, the film is directed by Peter Ramsey and produced by the ingenious Guillermo Del Toro. “Rise of the Guardians” is the perfect film for the entire family this holiday season. It is full of humor, illustrious visuals and eye-popping 3D and it enchants the audience as it takes all the conventions of the holiday season and turns them into a grand adventure.

For hundreds of years, Jack Frost (Chris Pine) has been living as the embodiment of winter, controlling snow, ice and frost. Where he came from or who he was he cannot remember — the first memory he has is of waking up in a frozen lake and the Man in the Moon telling him who he was. He is just like an adolescent boy, always wanting to have fun and not take anything too seriously.

When the Boogeyman named Pitch (Jude Law) returns with plans to turn all children’s dreams into nightmares and permanently destroy their belief in the mythical holiday characters, the group known as the Guardians steps in. The Guardians are: North (Alec Baldwin), a well-built and Slavic accented, tattoo-bearing Santa Claus, Bunnymund (Hugh Jackman), a very large Australian Easter Bunny who turns every Easter into an egg-celent holiday, Tooth (Isla Fisher), a feather covered spritely tooth fairy who has hummingbird sized minions to help with the swapping of teeth with currency, and Sandy, a mute but oh-so-eloquent Sandman who weaves a magical gold dust that makes the beautiful dreams for all children.

The Guardians attempt to confront Pitch, but his power has grown since their last encounter and they must initiate a new member to their heroic team. To their surprise, the Man in the Moon selects Jack Frost and they will have to put their feelings about his mischievous ways aside in order to have a chance to defeat the nightmarish powers of Pitch. Jack Frost’s inner turmoil is enhanced when he overhears a young boy named Jamie (Dakota Goyo) discussing his beliefs in the holiday characters and then realizing he is unknown and unseen by the children of the world. Can Jack Frost become the hero and true Guardian he was meant to be, or will his own issues cloud his judgment and ability to grow up and be responsible for more than himself? The race is on as the nightmares begin to spread and children start to lose their beliefs in the holiday characters, and without that power the Guardians will begin to lose their powers and fade from existence.

Not only is “Rise of the Guardians” the perfect movie for the holidays, but it is a fun and compelling film full of humor, wisdom and emotion that is sure to become a family favorite all year long. The animation is top-notch, ranking among one of the most colorful and imaginative animated films I have seen in a long time. With a unique design for its world and characters, it stands apart from other recent movies and is original enough that it doesn’t remind me of other recent films — and that isn’t very common nowadays. The addition of 3D, like with most films, adds a fun element of making you feel like you’re part of the movie, but while it was well executed and not cheesy, the 3D it isn’t necessary and the movie would be just as enjoyable watching it in 2D.

The voice casting is spot-on with Chris Pine’s Jack Frost at the emotional center of the film. Frost has just enough pathos to make his journey emotionally and intellectually stimulating and compelling. Pine perfectly balances the hubris and heart that makes the audience want him to succeed in his plight. Alec Baldwin’s North is the most unique reimagining of the mythical characters, looking like a battle-ready Santa Claus who is tough enough to fight, but still warm and endearing. The sense of humor involving Hugh Jackman’s Bunnymund and his eternal feud with Jack Frost over an Easter that was ruined by an early freeze is a running gag through the film and the playfulness and competition between the two was a nice dynamic.

The final two members of the Guardians are the far sweeter and meeker of the group. Isla Fisher’s Tooth and the mute Sandy were both so sweet and delightful that their presence in every scene makes you smile and adds a much-needed balance to the rag-tag group of heroic characters on this quest of the highest importance.

While Jude Laws Pitch was dark, menacing and filled with rage, he also had a tragic nature to his character that made you feel for him and added another dimension to his back-story, making even this villain somewhat relatable. And while I thoroughly enjoyed Dakota Goyo’s heart-warming performance in “Real Steel,” his young character Jamie didn’t have a lot of screen time, but still added the innocence of a child and unfailing belief in magic and mystery the story needed.

“Rise of the Guardians” is one of the smartest and most imaginative animated features I have seen this year and everyone involved should be applauded for their good work. The creativity of the story, mixed with the heart and sentimental nature given to all of these characters by the actors, creates the perfect blend.

DreamWorks Animation and Paramount Pictures should be extremely proud of this movie that not only entertains, but, as with every good film geared for kids and families alike, has at its core issues and lessons to be learned from while not feeling too preachy. I will say that “Rise of the Guardians” is a film the entire family should see this holiday season and which will probably become a staple in your kids’ DVD collection for the future. So take a ride in the sleigh on a magical and enchanting adventure of a lifetime.

“Rise of the Guardians” is in theaters now and is rated PG for thematic elements and mildly scary action. You can see the movie’s trailer HERE. 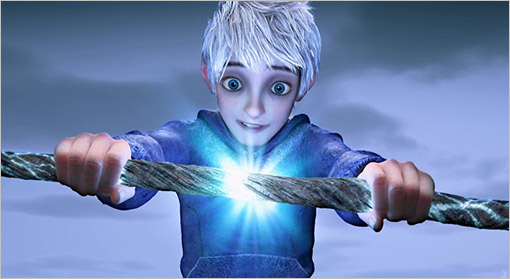