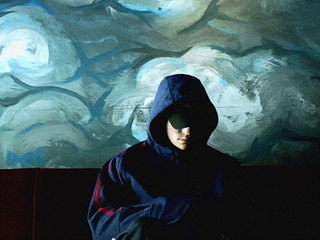 The supposed “found child” dies his hair blond and meets his “sister” who flies to Spain to meet him. He claims sexual abuse and torture by a possible military ring that infused his veins with a dye to disguise his eye color and general appearance. The entire trauma accounts for his loss of memory. His sister brings out family pictures and teaches him who he is. He swears he is a US citizen, gets a passport and flies to Texas with his “sister” to be reunited with his family in Texas.

It’s a bizarre tale, but what is interesting about human psychology is that all family members accept this new “son” as the original.

The imposter, really Frédéric Bourdin, explains, “As long as I can remember I wanted to be someone else. Someone who was acceptable. What I learned very fast was to be convincing.”

But when he took on another identity, how did it go for him? Was this better than the life he had left behind? What was his new family like? What does he suspect happened to the real Nicholas?

Soon we suspect that mischief is afoot with the first Nicholas. Then a private detective, who soon figures out the second Nicholas is not for real, becomes a bloodhound on a trail he can’t leave alone.

When authorities come for a DNA sample the mother lays down on the floor and won’t allow them in to test her “son.”

This is one of those stranger than fiction types of stories. If it wasn’t true we wouldn’t believe it. However, it happens to be a well-done doc with suspense, realistic re-enactments, interviews, and excellent editing that puts together one surprising twist after another.

And what about human nature? The mind is a flexible, plastic organic machine. We believe lies all the time – from politicians, Fox News and sociopathic boyfriends. Like we learn in “Life of Pi,” lies can form a fabric that helps us live with the more traumatic truth. Sometimes the lies, the myths, the fairy tales and the set of rose colored glasses are more palatable, more believable, more helpful and desirable than reality.
What this family worries might have happened to the real Nicholas is just that kind of nightmare. To have him “appear” gives everyone, including the imposter, a second chance.