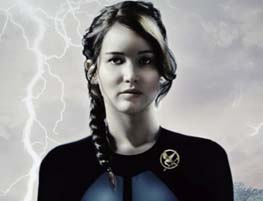 Production on “The Hunger Games” sequel “Catching Fire” has wrapped and Lionsgate has released a motion poster for its fans to whet their appetites.

After winning the 74th Hunger Games, Katniss Everdeen and Peta Mellark return to District 12, but winning the Games means that they only have a few months at home before departing on their “Victor’s Tour” of the other districts in Panem. As Katniss and Peta make their rounds through each district, Katniss senses unrest among the citizens and catches scent of a rebellion brewing. The Capitol, however, is still very much in control and President Snow prepares the 75th Hunger Games also known as the Quarter Quell. These Games could possibly change the rest of Panem forever.