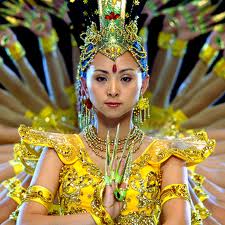 “Samsara” is a magical experiment in the power of sound and imagery. This glorious poem of life, set to a gentle, haunting original score, guides the viewer in a visual meditation on the nature of life.

The image choices and how they are organized propel a dialogue within each viewer. Thai girls dancing in strictly choreographed splendor with facepaint, fake fingernails, and golden costumes juxtapose fiery, billowing volcanic activity. An image of a newborn follows. Then a blackened, withered, fossilized old person lies still on the screen.

The surprising beauty, glory, and awesome manifestations of people and nature are manifested in a visual samsara, which is a Sanskrit term literally meaning continuous flow, a concept used in Buddhist, Hindu, Yogic, Jainist and Sikh traditions. It is comparable in meaning to the western idea of the cycle of life. Appropriately, the film starts out with the flow of dance, lava, birth and death. What follows are variations on this theme that reflect a stream of juxtapositions.

The most startling section of this artistic tableau is when an ordinary man, in the credits noted as performance artist Olivier de Sagazan, dressed in a nice gray suit sits down at a table and lathers his head in mud, transforming himself in a fast series of painted grotesqueness to the sounds of Tibetan horns and cymbals, but expressing his own expression of samsara.

Ron Fricke and Mark Magidson collaborated on this project after successful productions of two earlier meditative masterpieces, “Chronos” and “Baraka.”

Taking what they learned from their prior experiences, the filmmakers took almost five years to create “Samsara” using 70 millimeter film in 25 countries and five continents to create an epic poem set to a haunting, plaintive, tender set of gentle music composed by Michael Stearns, Lisa Gerrard and Marcello De Francisci.

Watch the following trailer and write the first three words (or more) that come into your mind in the comment section. We can respond with our own poem creation that can be sent back to the filmmakers.