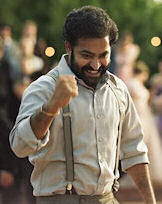 “Rise. Roar. Revolt.” That is the meaning of the three Rs that constitute the title of this 2022 Tollywood extravaganza. And they certainly do describe it.

Based on an imagined meeting between two real-life Indian revolutionaries who fought the British Raj but never met, this opulent, eye-popping adventure is set in 1920 in the region of Dehli (north central India). There, the brutality of an arrogant British lord, Scott Buxton (Ray Stevenson – “King Arthur”), and his equally vile wife, Catherine (Alison Doody – “A View to a Kill”), leads to two uprisings. One seeks to arm the Indian populace and face off against the British. And the other, more subtle (I use that word advisedly – the is no real subtlety here), one is the freeing of a young girl with a beautiful voice, taken from her family by the Lord and his wife and kept imprisoned in their Delhi palace/barracks.

Komaram Bheem – played by Nandamuri Taraka Rama Rao Jr., the star of numerous Telugu (Tollywood) films – is the “shepherd” who comes from the native village to Delhi in search of the lost “lamb,” Malli (Twinkle Sharma). Rumor of his mission reaches the palace, and Catherine sends a young, incredibly brave Indian officer, Alluri Sitarama Raju (Ram Charan – “Magadheera”) to discover and capture Bheem. Then, the two meet, without realizing they are hunter and prey, and become fast male friends as only Indian cinema can portray.

Director/writer S.S. Rajamouli (“Baahubali”) has presented us with an epic tale replete with fabulous landscapes (mostly filmed in India), gigantic crowds (it is impossible to separate the real thousands from those done in CGI), animal riots (done in CGI, but the tiger chase and capture is incredibly realistic), one-dimensional characters (specifically the British, with one romantic exception), stunts (Gravity? What gravity?), and of course lavish music and dancing set pieces (not quite Bollywood, but still fabulous). All that compacted into a running time of ONLY 187 minutes.

The acting is over-the-top by Western standards, but so what – this is a story told with the grandeur of the romantic landscapes and battle paintings of centuries past.

Costumes, lighting, frame composition, music; all are superb. Action? There is enough action here to fill the typical “Marvel” flick and then some.

The version I screened was Hindi, with English characters speaking English and subtitles for the Hindi speakers. The film was originally filmed in Teluga and dubbed in several languages.

This is one highly recommended “wild ride” of a movie. 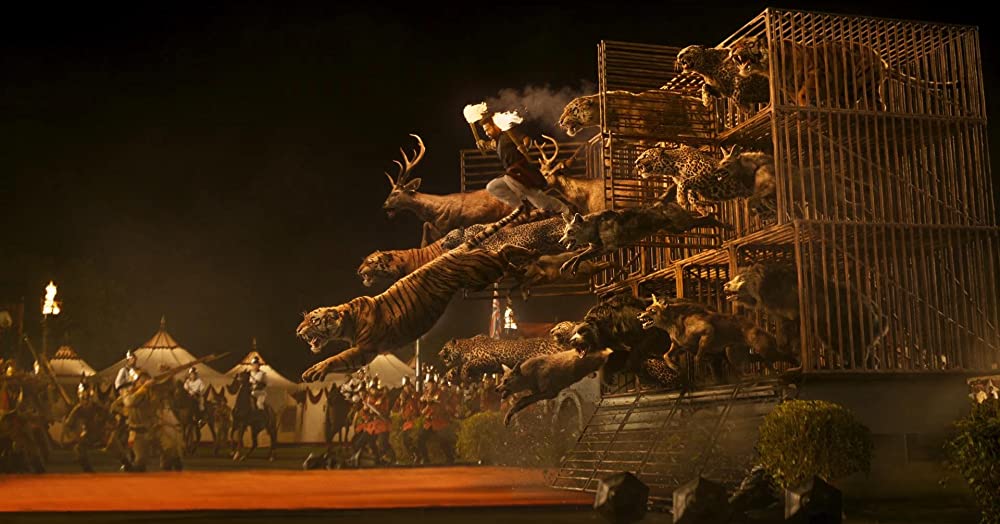 • Both Bheem and Raju were real Hindu fighters for Indian independence. However, they both died at the hands of the British (1940 and 1924 respectively) before the non-violent victory of Mahatma Ghandi. Recent events in India have downplayed the concept of Ghandian non-violence as Hindu extremism rises.
• Winston Churchill, British Prime Minister during WWII, was opposed to the dismantlement of the empire, including the freeing of India. He also proposed using poison gas against the rebellious “uncivilized tribes” of northern India early in the last century. The toll on the Indian people during the 89 years of the British Raj is estimated as high as 35 million souls.