In a setting as forbidding as it is beautiful, 14-year-old Elle Marja ropes, tackles and then caresses a reindeer on the frozen ground. She is a young adult member of the Sami people and she is expected to pull her own weight. With the frozen arctic skies as her backdrop she cuts off a small portion of the reindeer, marking for her family. Since her father’s death it is especially important that she, her sister Njenna and her mother support each other no matter how hard the task or how long the day. 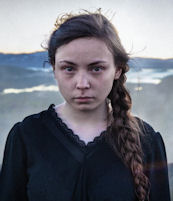 The stark, crystal clean skies of artic Sweden, Norway and Finland are a forbidding pallet with which to paint the centuries old culture of the Sami. As a teenager, Sami grew up learning more about handling a sharp knife than applying makeup or selecting a dress. Nonetheless, she is sent off to a Swedish boarding school to attend mandatory classes.

The classes, couched in the missionary zeal of religious salvation and the liberal nirvana of reading, writing and arithmetic, serve an entirely different purpose for the establishment. Once at the school, Sami children are poked, prodded, stripped and photographed by scientists analyzing how they could be so backward. In being taught a fraction of what they might need to survive in the cities to the south, the real lesson is who is boss.

At the end of her short education, Elle Marja has learned more than intended. She wants to go on learning but that is forbidden. The authorities have no intention of making even one Sami person capable of criticizing them. Sami strikes off on her own for the city, to survive in a world as foreign as Mars, mainly to prove she can.

Many stories have explored the heartbreak and ecstasy of people challenging themselves to survive in radically different cultures, geographies and social strata. Writer/director Amanda Kernell succeeds admirably in using the stark arctic surroundings and utter lack of pretension and aggression in Elle’s born life to highlight the glaring flaws in a pre-Nazi society going mad. The tundra, swept clean of all but the most humble and adaptable makes the flaccid corruption of industrialized civilization look like a compost pile of dying flesh waiting to be recycled by war.

Beyond the social commentary, she is able to direct new actress Lene Cecilia Sparrok into a persona that is not the least bit victimized. Rather, the girl is Neil Armstrong setting the first foot on the moon. She is wary, even fearful, of her surroundings, but in possession of an inner strength that she knows is lacking around her. Even as the raging hormones of her petulant adolescence boil over in occasional missteps, she can use the absolute honesty of a natural survivalist to cope with even the most foreign and distasteful of tasks.

Between the actress and the director, there is the most powerful sense of a human caught between two worlds, orbiting around one and then the other but never touching ground on either. By the end of the movie, as an elderly woman, Elle has, perhaps, flown too close to the sun. Such is her fate, to find out what lies over the hill, no matter what the cost.