The most important thing an artist must convey, to be truly worthy, is thought. “Straight from the horse’s mouth. You have to know when you succeed and when you fail and why. Know thyself in fact. In short, you have to think,” says Gulley Jimson. 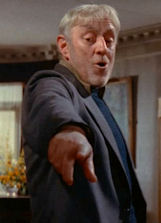 “The Horse’s Mouth” is the last part of a trilogy written by Joyce Cary, an artist, poet, and writer lightly mentored by George Orwell. It could be called a sequel to James Joyce’s “A Portrait of the Artist as a Young Man” in that Cary’s portrait depicts the artist as an adult, yet still individualized and disconnected from the norms of society and devoted to his art.

Cary’s story of artistic obsession was brilliantly adapted as a farcical screenplay (link at end) by Alec Guinness, who was nominated in several categories for his genius in writing and acting in “The Horse’s Mouth.” He changed Cary’s depressing, escalating self-destructive characterization into a comedy, depicting an obsessed penniless artist who disregards everything important in his life to pursue, through any means, his ability to create, on a canvas or wall, his ideas.

Guinness, famously identified as Obi-wan-Kenobi in “Star Wars” and Col. Nicholson in “The Bridge on the River Kwai,” transforms his voice, walk, and physical looks. He talks in a hoarse (yes) voice, walks like a puppet, slightly tilted and a little off-balance as if controlled by strings, and dresses in what appears to be a well-slept-in cast-off rumpled suit with perpetually rustled hair. He is almost unrecognizable. At one point, he disguises his already altered voice to sound first like an aristocrat and then, later as a woman, in phone calls to his elderly benefactor, trying to extort more money. Guinness’s versatility is stunning.

In effect, he becomes the opportunistic Gulley Jimson, who uses everyone to get what he wants which amounts to painting supplies and a surface. Guinness’s characterization shows Gulley as a version of an innocent Charlie Chan, funny and tragic at the same time. However, Gulley’s very name and character in Cary’s original version conjure up kind of a gutter + alley rake who more greedily disregards everything but his passion for creating.

Cary, Guinness, and James Joyce all satirize western culture, spearing the hypocrisy in government, religion and aristocratic society. Gulley Jimson is an iconoclast who verbally and artistically attacks the very establishments that prop up his environment. On a personal level, he torpedoes every connection he has in order to achieve a sense of freedom that allows him to reach into his subconscious to stream his work.

Ironically, Jimson’s greatest work turns out to be the portrait of the woman he abused, made wild love to and took advantage of for a number of years – Mrs. Sara Monday.

I’m not saying Jimson was capable of love, but he was completely devoted to passion. Whether it was anger, hunger, alcohol, sex, thought or art, Jimson was obsessed. But his primary driving, inescapable obsession was to express his ideas through colors, lines, dimensions, and light with his hands.

Sara Monday was his common-law wife and model for his greatest work, “The Woman in the Bath.” Her appreciation of his genius blinded her to his irresponsible, self-centered character. In turn, he used her to take care of him. Cary searingly depicted the servanthood of women and the suffering this caused.

However, Sara Monday also represents the core of the creation story for Jimson. In biblical terms, her name represents the first day of the world’s creation. She is the archetypical woman, good, wholesome and almost purely innocent. When in his iconoclastic obsession he frustratingly and helplessly drives himself to destroy and alienate himself from everything, including Sara, Jimson creates his last and ultimate work of art, ironically titled “The Creation.”

The aphrodisiac for the artist is in creating because it is then that the artist becomes closest to being God-like. For Jimson, like James Joyce’s Stephen Dedalus, religion is just what they both spend a lifetime criticizing. But creation, the work of God, is the ultimate narcotic and Jimson will do anything to obtain it. Cary has him say, “A miracle. I have transformed a chunk of wood, canvas, etc., into a spiritual fact, an eternal beauty. I am God.”

Alec Guinness’s insightful masterpiece “The Horse’s Mouth” is full of thought, satire and artistic genius. It can be easily accessed at http://www.dailymotion.com/video/xxny4r_the-horse-s-mouth-1958_shortfilms