Frédéric Mermoud’s simmering revenge mystery is less thriller than self-study. Set on the shores of Lake Geneva, the misty miasma wafting across the cold fiord focuses the eye on the mysterious mountains along its shore. Diane (in a powerful performance by Emmanuelle Devos) is standing at the railing of ship crossing the forbidding lake. She has not come to see the world-renowned scenery amongst the alpine shores, but to deal with the demons of a terrible loss. 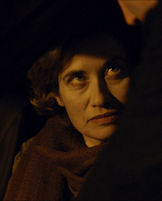 Her young son, a talented, innocent and beautiful teen, has been killed in a hit-and-run car accident. She is so stricken that she is unable to grieve. Her mind is a whirlpool of emotion that allows for neither sleep nor awakening. Leaning hard against the ships railing, she barely sees the young rogue step up next to her. He is on a mission, too, but of a different sort. He is the kind of man who she might need. The kind who might be able to find her a gun. “It looks beautiful but it is dangerous,” he tells her, pointing to the icy waters layered with thin vapor. “Many people have drowned here.”

The message is well taken, for many have perished where Diane treads. Either the body perishes, or the soul. It is a cold death and Diane is walking on the edge. She meets a man in a cute touristy café and he tells her he has found four cars, and was lucky to be able to do that. Devos’ expression almost tears down the walls of the trendy coffee shop. Only four cars but one of them must be the murder weapon.

So starts the story of Diane’s meeting with Marlene (a radiant Nathalie Baye) and her stalking of those she is convinced killed her son. We are unsure. The evidence is a dark colored car, a larger sedan with twin headlights. This shakiness pervades the entire story, making it hard for writer/director Frédéric Mermoud to build tension. It would have been a better mystery if we were better able to identify with Diane.

As it turns out this is less of a mystery thriller and more of a descent into madness. Like a trekker lost in an alpine whiteout, Diane seizes on anything of any substance regardless of its rational significance. Four cars or a hundred, one of them is the one. The car is for sale and by posing as a buyer, Diane insinuates herself into the dysfunctional family of Marlene. She may be sorry she ever set foot on that rocky shore or Marlene’s situation may be even more mad then her own.

Based on the novel by Tatiana De Rosnay, this film adds little to the story except the shimmering acting of Devos and Baye. Both are outstanding, but there is little more to the cast then the two of them. Cinematographer Irina Lubtchansky seems well chosen based on the success of her work in Arnaud Desplechin’s “My Golden Days.” The dreaminess of the setting pockmarked with nightmares of ill-defined guilt and remorse are contrasted with the practical matter of getting up in the morning and existing in the real world. Nathalie Baye is able to bring her work within the loving but dysfunctional sphere of “Catch Me If You Can” husband Christopher Walken’s tilted universe.