Ansel Elgort and writer/director Edgar Wright power through this mayhem fest with a quarter mile soundtrack and rocket launch car chases. Not chases, they are more like bike acrobatics with rocket assist engines instead of wheels. The story starts with near catatonic Baby launching his Subaru into low earth orbit in Atlanta. This is going to be fun. 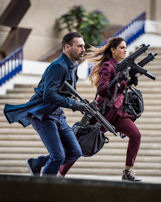 Wright dumps most of his hugely successful “Shaun of the Dead” Simon Pegg trope and moves on to earthy inner-city drama with a strong underpinning of superpower action. In a resurrection of the immortal “last big job,” Baby (Elgort) is blackmailed by crime boss Doc (Kevin Spacey) into joining his team of lunatic killers. Doc knows all the angles. He is a perp with Superman’s x-ray vision to see through walls, vaults and people. Non-cooperation is not an option. Quitters are killed along with their friends, relatives, lovers, neighbors, paper boy and pizza delivery guy.

Doc never uses the same crew twice and that is a delicious idea. More drooling semi-coherent killers than in Gosling’s “Drive” make for a better movie in anybody’s book. This is the part of the zombie thing that Elgort retains. His urban warehouse shooters are zombies in street clothing. Which brings us to Jon Hamm.

You saw Hamm in “Mad Men,” but this flick busts him so far out into left field that he is unrecognizable. Director Wright is able to take his early “Mad Men” persona, which is deliciously weird by itself, and inject that character with steroids like the venom in “Spiderman” that turn him into a zombie reservoir dog. Barely coherent even before the flaming crushing explosions, carpet bombing barrages of cop fire and steel and glass fragmenting car wrecks, he keeps coming back like a drunken whirly nightmare, the probing edge of what Baby is becoming under the influence of Doc.

If Hamm is willing and able to stay in Breaking Bad-land permanently, there could be exciting things coming.

Lily James plays Debbie the cipher and represents the good world of old cars (“Gee that old LaSalle ran great”), homey diners and loving families. No blame there. This is about Baby, Doc and the last big job and Lily is nothing more, or less, than the symbol of what Baby needs. First he must deal with the “hum in the drum” as Doc puts it, and that means to face up to his past. He cannot bring back the dead by driving his car better than Robert Mitchum in “Thunder Road” but he can but the demons to rest one by one.

Unabashedly commercial soundtrack is meshed perfectly with the non-stop action and nanosecond editing. Special effects and stunt crew numbers slightly above that of Sri Lanka. Great cast of supporting actors providing the backdrop for the noir L.A. feel. Great location shooting in Atlanta, providing a nice “yo’-mama” to L.A., which came up short in the location support department. Maybe people always drive like this in Atlanta. 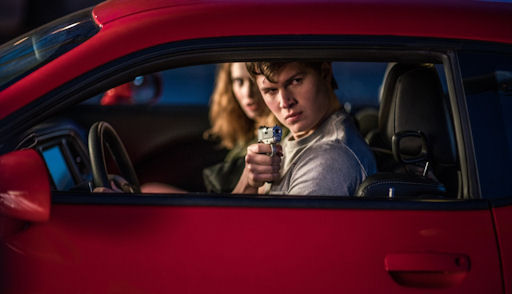