Review: Simon and the Oaks

There is war, forbidden love, danger, fire, beauty and insanity in this highly acclaimed Swedish epic film. Its complex environment includes the controversial story of Sweden’s compromising role in World War II and the subterfuge of its citizens who supported efforts to protect thousands of Jews while resenting their government’s economic collusion with Germany.

In the middle of this morass is an idyllic little piece of property on the edge of the water where. Simon has built a tree house in a massive oak. We soon become aware that Simon was adopted and doesn’t know it. Because a faction of Swedes are anti-Semitic and their government fraternizes with Germany, Simon’s folks think it’s safer for him to think he is just like all the other Swedish kids.

However, pushing the DNA envelope, Simon manifests genetic links to a cultural heritage of spiritualism, music and intellectual pursuit. He does not fit the standard Swedish stereotype of his practical, self-sufficient, woodworking adoptive Swedish father. He is contemplative and craves reading, listening to classical music and schoolwork over building boats and chopping wood. Music clears his head and communicates in a language he understands.

Coincidentally, he befriends a Jewish student and the Germans come to town. A personal and national conflict reflect a Sweden in dangerous limbo.

“Simon and the Oaks” is based on a best-selling Swedish novel by Marianne Fredriksson. In her book, time is given to developing Simon’s adoptive mom’s story. In the film the depth of her heart provides a pivotal focus. She provides affection to all sides of her family without taking a moral stand on how to bring up Simon, perhaps like Sweden’s attempt in processing its neutrality amongst its afflicted neighbors during Hitler’s rise.

The concept of fog threads itself through the story. Simon explains to his mother that fog is the sadness of the sea. Fog, obfuscating reality and knowledge, is the perfect metaphor for Simon’s situation. When he learns the identify of his parents, especially his father, he rages at his parents for not only for withholding information but for persecuting his now-perceived innate potential. The fog may be lifted from the literal events of the past but emerging are deeper, more murky challenges Simon must come to terms with.

This film speaks on many levels. It is a beautiful piece on adoption, a sensitive work on Sweden’s role during WWII and it’s an insightful perspective on the complex human condition. We so expect perfection in those we love so deeply. Understanding, or at least accepting, the flaws and weaknesses of those held dear is the ultimate fog Simon must clear.

“Simon and the Oaks” has received a record 13 nominations for Sweden’s 2012 Guldbagge Awards (Swedish equivalent of the Oscars), including Best Picture, Best Director, Best Actress and Best Cinematography.

“SIMON AND THE OAKS,” a Swedish film by Lisa Ohlin,
opens at The Paris Theater in NYC on Oct. 12 and at The Landmark in LA on Oct. 19.
Filmmaker Lisa Ohlin will be in NYC in October and available for interviews 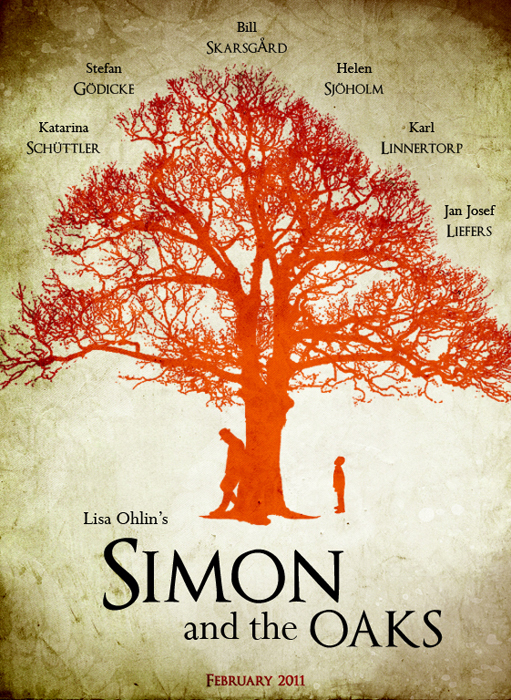