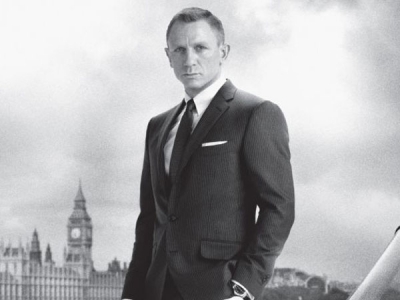 I was already imaging in my mind how my introduction to this review for “Skyfall” would run even before watching the movie. I am a longtime Bond fan, and after watching the trailers for the film, and reading about its enormous success abroad, I pretty much knew I would automatically love it. I had words like “impressed” and “blown away” ready to go in my mind, but now that I have watched the film, these words really do not express how I felt when I left the theater.

So, how would I start my article then? I believe the correct word to use is “fulfilled.”

The thing is, James Bond movies have always had — for 50 years now — a certain set of rules to live by … the girls, the gadgets, the smoothness. With Daniel Craig’s Bond movies, we were told they would be a sort of restart, or should I say, a reboot. This is why with the fantastic “Casino Royale” I understood his bluntness, his un-calculated actions. He was the opposite of smooth, with a hint that some day he could be that Bond we all know and love.

By the end of that film, he is wearing a suit and pronouncing his name in the classical way James Bond has always delivered, “Bond … James Bond.” We saw great progression for his character in just that one film, and they gave us an insight into what makes him tick. With “Quantum of Solace,” there was very little progression, if any, and it actually fell flat. He didn’t have any famous lines, gadgets, etc. Instead it was just a pretty standard action movie with a character named James Bond in it.

But with “Skyfall,” the journey of this Bond-in-the-works seems to finally come full circle. In my opinion, “Skyfall” is the first real James Bond film we’ve had since — and this hurts me to say — “Die Another Day.” Now, don’t get me wrong, I adore “Casino Royale,” but as I explained earlier, he was not the Bond we knew and loved yet. In “Skyfall,” we are treated to all, and I am saying “all” here, the classical Bond nuances that have always defined him.

Let’s go over some of them without spoiling the film.

The Villain
The villain of this movie is definitely a classic Bond type of villain. He is evil in ways that you (hopefully) only read about and never see brought to life, but with the fantastic acting chops of Javier Bardem (“No Country for Old Men”), and the directional guide of Sam Mendes (“American Beauty”), this is exactly what we got. He is a character with a back story. A story we learn throughout the movie, and a story that only strengthens the character and his motives. This was a great move on behalf of the writers and gave us a villain to remember. We also saw a return to the Bond villain with a physical deformity. I won’t say what it was, but if you watched the movie, you will of undoubtedly never forget it. And if you don’t know what deformities I am referring to, remember this: Blofeld had no earlobes, and later was scarred in the faced and in a wheelchair. Alec Trevelyan (“Goldeneye”) had the burnt face, and Robert Carlyles’ Renard (“The World is Not Enough”) had no sense of touch. And I will not forget to mention “Casino Royale’s” LeChiffre, who had the eye bleeding problem. These are just a few of the top of my head, but there are more. This is definitely classic Bond, and I’m excited they stuck to the formula.

The Girls
Ah, the Bond girls, a personal favorite of mine. The “Skyfall” film-makers definitely struck gold when they got their hands on Naomi Harris, who plays Eve. She has a large, surprising role in the film, and was definitely an asset to the movie. She wasn’t the typical Bond girl. She wasn’t really in distress, she wasn’t on any vendetta — she is an agent and she is struggling with her future. Where does she belong, in the field, or elsewhere? Harris played her role well. Berenice Marlohe’s Severine is definitely a classic Bond girl. She is receptive to Bond’s charms, and has a troubled past, which has led her to the side of the villain. Will she do the right thing and help Bond, despite her life being in danger if she does? Will Bond make her promises he cannot keep? Either way, we are very lucky to have these two talented actresses in the film and they really shine in “Skyfall.”

The Gadgets
All I can say without spoiling the movie is gadgets finally play a role in a Daniel Craig James Bond movie and I couldn’t be more thrilled.

The Action
The movie does have various action sequences, which fluctuate between the classic smooth Bond and the rugged blunt object Bond was in “Casino Royale.” I think this was their intention and it translated well to film. The action was also necessary to the story, and to the progression of the character. The film started fast, ala “Casino Royale,” then went into its own unique style of action that I can only describe as a mix between “Patriot Games” and the first “Mission:Impossible.” As a matter of fact, the drama and the story also follow these two movies pretty close, in my opinion.

All in all, Bond is back, and I am very excited for his return. I also cannot wait for the next film and this is mostly because of the way “Skyfall” finishes and sets things up for the next movie and all future installments.

Is it the best Bond film? Is it better than “Casino Royale”? I personally don’t think so. It is what it is, and to me, it is the completion of the James Bond journey of finding himself. The blunt object/diamond in the rough may have finally found who exactly he needs to be. His brute ways have a role to play at times, but his disguise is the smooth Bond we all know, calm and collected even in the face of danger and death.

Welcome back, James. We missed you.