Review: Song of the New Earth

Tom Kenyon is a sound healer who does not expect anyone to believe his story. He has even investigated the possibility that his visions, voices and experiences might be signs of mental illness. But what is universally agreed upon is that Tom Kenyon is extraordinary and he has followers from all parts of the world who have benefited from his work. 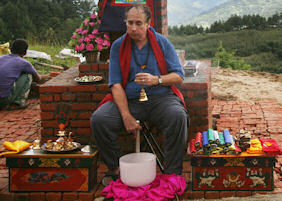 The foundation of Kenyon’s work is that “music and sound are both the language and architecture of the cosmos” and his message is about healing and survival.

The film alternates between Kenyon’s life story, his music and his philosophy. As the film continued, I began spontaneously dropping into a meditative state each time one of his vibratory sound sessions began. Don’t resist doing this, even if you don’t buy into anything that is being said or are in a large auditorium with a thousand strangers. Closing your eyes and just listening will help you understand his work on a deeper level.

Interspersed between examples of his vibratory performances, Kenyon speaks easily about his life outlook:

I believe that the entire human collective is in our dark night of the soul right now. The despair and hopelessness of humanity is just breathtaking and beyond words. And the eco-system is screaming and no one knows what to do. My only hope is that you hit that dark point of no return and you are in it for awhile and then something turns. And new ideas will bubble up – solutions will come forward for us to change the course of our history and we will come out of the depths of the heart and mind in a way we cannot anticipate.

In explaining the power of his vibratory presentations, his music, Kenyon says:

Sound vibrations speak to our souls, they speak to our bodies, bypassing the cognitive mind. And when that happens a door opens and when people go through that door they experience miracles and mysteries they never imagined.

Kenyon has been asked to sing a song of a new earth, a transformation in thought and action for how we think and act, around the world.

If we are to survive we must raise the feminine out of the ashes that we have created as the global culture for centuries – and have the two meet together – male and female together – not one above the other – but in equality – and with that union create a new world.

Several areas of interest are exposed in this film by acclaimed director, Ward Serrill, whose filmmaking focuses on social causes that have a potential to affect change for the common good. Artfully edited by Eric Frith, footage includes helpful cartoon make-ups to explain early parts of Kenyon’s life along with sacred views of Buddhist nuns chanting in a Tibetan convent. The nuns, with their powerful harmonic chanting, were an eye-opener for Kenyon and his wife who were so impressed that they produced a CD of their experience with all profits going back to the nun’s order: http://tomkenyon.com/store/nuns/.

Kenyon is a self-professed “…neo-pagan, Daoist, Tibetan Buddhist, agnostic, quantum physicist mystic all rolled up into some strange amalgam.” His life story, four-octave vocal range, vibratory presentation and words are worth whatever time and money you have to spare. 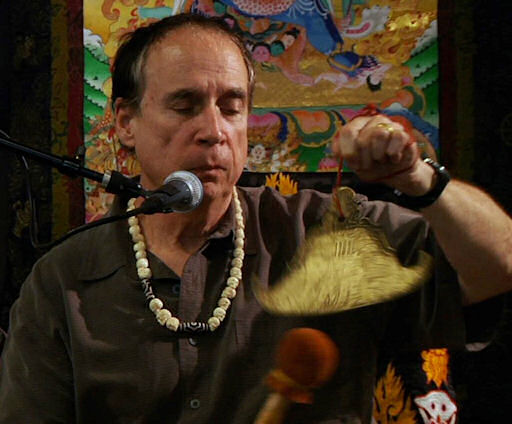 “Song of a New Earth”
Aug. 29 – Sept. 4, 2014 at the SIFF Uptown Theater in Seattle
Aug. 31 at Dreams of the Heart Meditation Group, Fairbanks
Sept. 9 to 11 at The Rose Theater, Port Townsend, Wash.
Other Screenings: http://songofthenewearth.com/screenings/