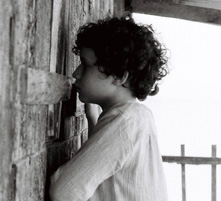 This is the haunting story of the life of a woman. It begins with a witch being carted to the deathbed of the woman’s pregnant mother. The daughter is apparently carved out of her passed mother’s womb and taken to an isolated wooden boxhouse on top of stilts in the middle of the water where fish are decreasing and salt is dried.

This is magic realism, where the unexplained is juxtaposed with a mundane slow-moving, possibly boring existence in a little Brazilian community on the coast. People have little to say and a heaviness in their hearts. As a matter of fact, despite the wisping grasses in the wind, there is a heavy mood pressing all the adults in this film.

A waving-in-the-wind tattered window curtain, a creaking rotating windmill blade, fluttering clothes out on the line to dry – these images are the environment of the baby brought to the boxhouse. But one day a visitor, a curly-haired innocent boy named Joao (Victor Navega Motta), who has lost his sister, arrives at the house and opens the shutter. Though he falls back into the sea, the cork in the bottle has been popped and the beautifully captivating girl soon leaves, on her own, in a canoe with her dog. There is no witch anymore, and soon there is no dog either.

Things come and go as youth comes and goes.

Each viewer will have a different view of the actual, simple events occurring in this black and white film. There is little dialogue and little scenery change. Everyone and everything stay the same except Clarice, who begins and ends in the same birth bed at a remote inn.

Clarice is the name of not only both the girl and her mother, but the innocent boy’s sister. In Latin and Greek it means bright and clear. And that typifies the weather each day during Clarice’s life, until the time comes when a candle, another kind of light, tapers down and rain is heard gently tapping on the inn’s roof.

The questions everyone must answer for him/herself include interpreting the plot and the players, including the dog, witch, young boy, medicine man, and father. Is this a community of secrets, guilt and unfulfillment? What pressure keeps them from happiness? What force keeps them from excitement and curiosity? And really, who or what do the witch, boxhouse and Clarice represent?

Part of the 2013 Global Lens Series, “Sudoeste” is playing Aug. 11, 2013, at the Northwest Film Center in Portland, Ore. It is a thoughtful film, a Rorschach Test if you will, that will resonate with you for days as you work it out like a puzzle, perhaps revealing by accident some of your own life.

SPECIAL NOTE ABOUT THE INTERNATIONAL GLOBAL LENS SERIES
“Global Lens is an annual touring exhibition organized by the Global Film Initiative (GFI) to encourage filmmaking in countries with developing film communities. The ten films in this year’s program—from the little-seen cinemas of such countries as Chile, Egypt, Iran, Iraq, Kazakhstan, and Serbia—include projects developed with seed money from the GFI and offer a contemporary survey of fascinating filmmaking from areas where political, cultural, and economic challenges make independent feature filmmaking and distribution a formidable challenge. Accomplished, entertaining, and thought-provoking, these films are all deeply rooted in the social and political realities of the countries where their talented and resourceful makers live and set their stories” (quoted from Northwest Film Center).