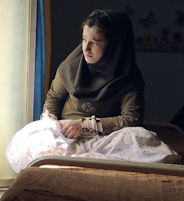 After seven years of trying, award-winning director Mehrdad Oskouei was given access to an incarceration facility for girls 18 and under in Iran. Gently asking them why they were there and what their hopes for the future were, he discovered a societal crime greater than the girls’ convictions.

I had assumed that in more religious societies, like Iran, crime, especially amongst women, might be a little more controlled. Much of Iranian law is Sharia law, so I thought that with harsh consequences Iranians, as opposed to Americans, would be more law-abiding. But the societal sins of denigration, molestation and abuse of women are the early seeds that can end up in their drug abuse, theft and even murder – wherever you live.

What was remarkable to me was how well the Iranian system took care of these special girls. First of all, they were all housed in bunks in one great room as opposed to separate cells. Here they formed a community, administering to each other’s tears. They helped take care of one girl’s little baby, they sang and they danced.

Kindness and support were evident. A local pizzeria sent in pizzas one night. A woman came in to show them how to make puppets. An Islamic instructor regularly came to lead them in worship and answer their unrestrained questions about the male-centered culture that got them there.

One pretty girl was found with drugs in her purse. She was molested, along with her sister, by her aunt’s husband. When she told her mother, she was hit and told she was lying. What is her goal now? “To die. I’m tired of living.”

Somayeh was convicted of murder. She explains, “One night we decided to kill my father. It was my sister’s idea and my mother and I agreed. There comes a time when you can’t take it anymore. I used to wake up to the sounds of my dad beating my mother with a chair.”

The girls wash their own clothes and hang them in the outside courtyard to dry. In the winter, as they take them down, they are frozen stiff – like their own hearts. Yet as the spring thaw comes and the icicles drip, there is hope that through their gentle camaraderie they can find peace.

This outstanding, delicately delivered documentary is a part of the 2016 Human Rights Watch Film Festival. “Starless Dreams” offers a new appreciation and respect for our Iranian brothers and sisters as well as a greater feeling for the responsibilities we all share as part of the human family.