Director Jonathan Gurfinkel follows 15-year-old Gili (Sivan levy) through a few days of her life as she begins attending a new school. The new school is a new life for Gili, with new surroundings, a new neighborhood, a new social circle and new social demands. The first part of the film is everything that is exciting, challenging and terrifying about being in a completely new place. However, by the end of the first set of scenes, when Gili is dropped off at what is supposed to be her house and we walk with her across the street to her real apartment, we know something is not right.

Gili is running from something and she and her mother (perhaps a single mom, we do not know for sure) have come to this new place to start over. Their new home is a modest apartment in an upscale suburb on the outskirts of Tel Aviv. Many teenagers have clothes and accessories from Tel Aviv and the cars and electronics to match. Gili is immediately conscious of this and the filmmaker makes sure we are, too. As Gili is dropped off and her ride pulls away, she slowly, in the shadows, crosses the street to her building. As she enters her real apartment we get a glance at her mother who looks just like Gili only a thousand years older and with a face pocked with fear and defeat.

It is possible to write an entire story with only one sentence and writer Rona Segal has done that with this striking story of a short time that will resonate forever. By the end of this 100 minute excursion into three or four days of Gili’s doomed reincarnation we feel as if we have lived about five to ten years before the film and five to ten years after it.

First hearing the title, one expects a fluffy teenage sex comedy. A high school girl is determined to succeed in a tough social environment by using her sexual appeal as a tool, and perhaps as a weapon. After the first five minutes of the brutal inside handi-cam view of teenage social rituals we know there will be nothing fluffy. Gili is needy. We see it and everybody sees it; she might as well strip off her clothes in home-room. Things are not going well for her because she is not capable of hiding her neediness. The more she displays that she is willing to debase herself the more her social circle debases her. 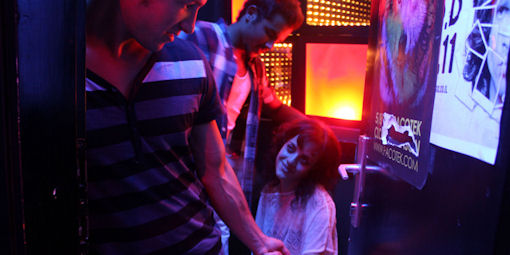 As the story wears on the plot assumes the feeling of an American 1950’s teen melodrama (“Town Without Pity”) with amazing accuracy. It is a fascinating question as to whether the writer and director intended this or whether such emotions are universal and the similarity just happened. Then the story veers into territory that is much more immediate, thanks to electronics that allow instant preservation for life of scenes we regret and the perverted, technology enabled parent who is on the lookout for pornographic talent.

By the final scenes of the film we do not even have to see the next 100 minutes that would be the next five years of Gili’s life. Everything gets worse.

A beautifully made film of an almost irredeemably disturbing nature, the camera work is dark, off-kilter, claustrophobic and lonely. The beginning of the film starts off in daylight, on the beach, and moves to a parking lot, a deserted swimming pool, and then mall, restaurant and night club. The last stop is her friend’s home, the home Gili always wanted, which is now within her reach. The mirage disintegrates before her eyes as the house reveals itself to be the dead end of Gili’s naïve hope for acceptance. Almost all of the scenes are shot at night, where darkness and shadows make fun of our attempts to see into each other. The darkness conceals bad motives and confounds good intentions. It empowers the strong and weakens the already vulnerable.

An Israeli film shot with immediately recognizable American stereotypes, “S#x Acts” leaves American viewers wondering if things are really like this in Israel or if they are simply making an American film with Israeli actors. Either way, it is a powerful and disturbing essay of exposure and vulnerability in the brave new world. 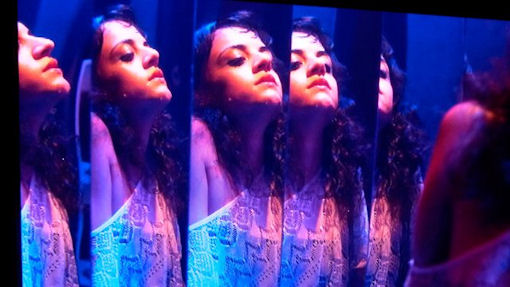