Review: The Autobiography of Karl Krogstad

Reminiscent of Steve Allen’s bizarre comedy of the 1960s, the wacko, surreal Karl Krogstad has created a film about himself. It is a little narcissistic, but so chalked up with images, metaphors and color, that audiences will either hurt from two solid hours of broadly smiling or be careening to the nearest exit as soon as possible. 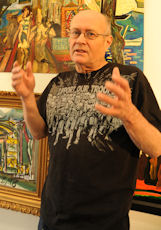 Picture this: Krogstad is standing under gray Seattle skies on a busy Ballard street in a bathrobe with a sign smeared with “Help.” A normal American couple drives by. The lady, surprised, spies Krogstad and announces to her husband, the driver, “That was Karl Krogstad!” “How do you know,” he queries. She responds that it’s because he’s wearing that bathrobe they gave him last Christmas.

To begin his autobiography, Karl fakes a wake and has people interviewed who used to know him, assuming he just died.

Later, back alive, Krogstad asks himself why he became a filmmaker. He explains that he will appropriate Robert Altman’s answer when he was asked the same thing, “I can’t do anything else!”

Wacky and irreverent, Krogstad takes on religion and prayer with a cinematic collage of human victimization and asks where prayer got these people. He proclaims The Golden Rule as his guidepost and a sense of humor and culinary mastery as his vehicles of choice through a life he figuratively paints with intense colors.

Krogstad, who works on a shoestring budget with volunteers, is an artist with a conscience. Wait until you hear what he says about Picasso! Those comments alone are enough to solidify him as an evolved, liberated, conscientious intellectual of the first order.

From his analogy of sound effects for sex, an oil can emptying into a car engine, to a clip from his notorious film, “Skunk Lady,” Krogstad’s irrepressible, iconoclastic creative voice is a continual carnival ride.

You were either a Steve Allen fan or not. He wasn’t for everyone. Krogstad isn’t either. But for those not yet exposed to his more than 60 films since the 1960s, this autobiography is a great introduction to Seattle’s most creative filmmaker and artist.


“The Autobiography of Karl Krogstad” will play at the Northwest Film Center on
Sunday, March 9, 2014, at 7 p.m. Krogstad will be present to introduce the film.