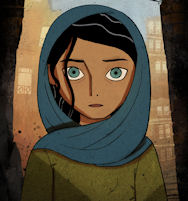 I couldn’t stop from noticing the ironic parallels in this film between the life of its producer, Angelina Jolie, and the life of women at large who are coming forward with complaints in one of the most advanced countries the world has ever known. Though “The Breadwinner” is an elegantly animated story of a child’s life in the Taliban-run Afghanistan of 2001, the political, social and spiritual merge into a microcosm of the world.

It’s a story of the repression of women, the corruption of the oppressor, and the effect of the devaluation of one gender on a culture. The female spirit is called upon to rise against injustice and overcome demons of fear. In the Taliban culture, there is only one way she can fight it, and that is disguised as a boy.

Woven throughout the film’s story is another tale, told by the youngest daughter to distract her family from despair. It is a parable about the seeds from the harvest that have been stolen. The people think their retrieval is impossible, so they settle in for their inevitable doom. However, one child believes there is a way and sets off on a journey fraught with monsters.

Meanwhile, the film’s protagonist must also embark on a seemingly hopeless journey to not only save her family, but find her father. She embraces her emotions, goes against all advice, risks all she has left, and sets out with conviction and courage. The archetypical kind, compassionate man must be found.

Though it is a simply designed adult-animated film, it is also a gorgeous template for what must happen in today’s “Me, too” world where women are standing up to expect better.

It is also the time for men to gradually, one man at a time, join with women in standing up for equality and respect for our mutual humanity. Though probably in the works for some years, this excellent Jolie film will mark its audience with a chill of recognition.

“The Breadwinner” is based on the popular book (2000) by Deborah Ellis and won the Peter Pan Award and the Middle East Book Award in 2002. It is now playing through Nov. 27 at SIFF Cinema Uptown in Seattle.