Alison Klayman, a progressive Jewish granddaughter of Holocaust survivors, consented to produce/direct a film on a man with whose ideas she does not agree. As a filmmaker and journalist, she has won recognition for her work on the Chinese artist and activist, Ai Weiwei, and on Nobel Prize-winner and human rights activist, Nadia Murad. She is a master at capturing the personal essence of notable people. 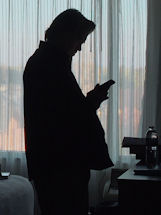 Enter Steve Bannon, Klayman’s new subject and Donald Trump’s onetime Chief Presidential Strategist. Informed of Klayman’s background, Bannon expounds on the precision engineering of Auschwitz and Birkenau, pointing out that the very architects and engineers must have been “detached from the moral horror of the Holocaust plans … people who sat through this whole thing. That’s when you sit down and say, ‘Oh my God, humans can really do this.’”

It’s two perspectives at once – just like he wears 2 shirts, one on top of the other. At one moment he takes one point of view and then he shifts seamlessly to another.

There is no interview and no moment for Bannon to speak to the camera. Klayman is catching him as he is throughout one year, from the early fall of 2017- to the late fall of 2018. This is film verité.

At one moment Bannon is telling a group how reminiscent the home they are in is of his grandmother’s, with all its crosses on the walls. Then he bustles from the event to his plane remarking he couldn’t be paid 10 million a year to live in a place like that.

Early-on in the film a somber Steve Bannon is on the brink of being fired by Mr. Trump. Then he gets the phone call. As he later gets in a car he is heard saying, “No glamor to the job at the White House. I hated every second I was there… – bad karma to it.”

Bannon takes credit for the Muslim Ban, the WH support of Roy Moore, and the presidency of Donald Trump. He’s against the formation of the EU and supported Brexit. He goes on stages to promote his point of view and he has elegant meals in Italy with far-right European leaders.

Bannon claims he’s “on a mission to convert everyone to the populist cause.” The specific populist cause he’s encouraging is Nationalism, the same thing Hitler, Mussolini, Hirohito, and Stalin thought was so great. 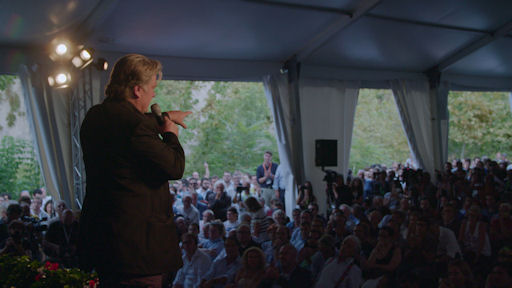 “The Brink” opens in New York City, Los Angeles and Washington, DC on Friday, March 29. A national expansion will follow.