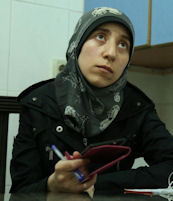 Nominated for the Best Documentary Oscar, “The Cave” explains what happens when 40,000 people are caught in a no-exit strangle-hold. With snipers on rooftops and sporadic planes re-bombing structural remains, the only safe place is deep underground.

Food is scarce and the only anesthetic is classical ballet music. Those daring to come out into the light for supplies or family missions are targets. When they are injured, they are brought to the underground hospital called The Cave where the Tchaikovsky begins.

Though millions of Syrians have been able to escape, some have not. Since 2013, when Russian allies joined the Syrian army, the inhabitants of eastern Al-Ghouta, on the outskirts of Damascus, have been tunneling underground to create a subterranean city.

Similar to “For Sama,” which documents a woman’s life in an underground hospital under Aleppo, “The Cave,” is under Al-Ghouta, a big city close to Damascus and 118 miles from Aleppo. Both films show the determined spirit of people who are besieged but resilient. The difference is that “For Sama” was filmed originally for fun by a Syrian girl who began her video experimentation by documenting her life. Then the war came and she kept filming. It is a longitudinal study of how war affects a woman.

The focus of “The Cave” is on Dr. Amani and the miraculous dedication of a hospital staff with few supplies. It was created by professionals with a clear focus on the resilience of an entire community and its dependence on the woman who runs the hospital.

Pitted against each other in the 92nd Academy nomination for Best Documentary, “For Sama” and “The Cave” both take place in underground hospitals during the current Syrian Civil War.

In “The Cave” someone asks, “Is God really watching?” We don’t know the whole situation. Why is Al-Ghouta being attacked so mercilessly? Is it a rebel outpost? What does the Syrian regime want and what do the people of Al-Ghouta want? All we know is that when Dr. Amani, comes out to look at the sky, she asks if the plane she sees is Russian. If it is, the hospital must be ready.

The not unexpected irony is that in this repressive land of women in hijab, Dr. Amani, a Syrian woman trained as a pediatrician, is voted twice as the head of the hospital but resented by male patients who think a woman’s job should be at home taking care of her family.

In Amani’s cold, underground labyrinth there are epidemics, accidents, malnutrition, disease, births, and deaths. An eight-month-old has cancer and is awaiting the okay from the Syrian government for an evacuation for treatment.

At one point, three missiles hit and the back part of the hospital collapses. Dr. Salim, a trauma surgeon, remarks dryly, “We don’t have antiseptic but we have music.” The tools are laid out and those who are saved from the blast are rushed to his operating table.

Dr. Amani asks rhetorically, “Why are we alive? We live so we can be something important. What’s the most important? Why is it important to be a doctor? To treat and help people.”

Feras Fayyad, director, and co-writer, was born in Syria in 1984 and educated in Paris. His focus continues to be contemporary Syrian issues and political transformation in the Middle East. “The Cave” is cinema verité at its best.

Excerpt from “The Cave” website: Dr. Amani’s story illuminates the unthinkable working conditions and heroism of Syrian medical workers. It is the hope of the film’s director Feras Fayyad, that “The Cave” will urge the global community to develop mechanisms that protect medical workers and sustain health care in Syria. Through the efforts of Danish Documentary and Think-Film Impact Production, the King Baudouin Foundation has launched the “Al Amal” (Hope) Fund. This fund aims to equip Dr. Amani with the support and tools required to aid Women’s empowerment, female leadership in conflict zones, improved and safer access to medicines as well as help educate and mentor young children in Syria. For more information, please visit the Al Amal Fund (https://www.nationalgeographic.com/films/the-cave/#/take-action).