Timothy Spall is outstanding as a demon stealing youth in this devilish fantasy thriller. Unfortunately, his screen time is all too short and the remaining key members of the cast and crew do not pick up the slack. The good news is that this family movie can be enjoyed by everyone. The values are there, good teamwork and equal time between the boys and girls. Spall is evil, but he is not so evil as to cause nightmares in children. Think 10 percent Stephen King and 90 percent Harry Potter. 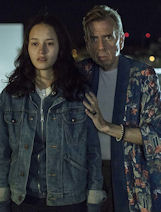 Lead Erana James gives it her best. She and Nicholas Galitzine play the girl-boy team that is the only hope her brother must escape the spell that will otherwise be his end. Directors Stuart McKenzie and Miranda Harcourt adapted the Margaret Mahy novel about Carmody Braque (Spall), a sinister man hanging out in a remarkably loathsome steel storage container. The story hinges on the shaky prerequisite that the victims must “invite” Braque into their lives before he can harm them. When they do that, he pulls the old bait-and-switch, dooming them to eternity as zombies trapped in the ether.

The location is the ruins of neighborhoods demolished by the severe earthquakes that hit Christchurch, New Zealand. The screenplay (and/or the novel) missed a good trick in not portraying Braque as coming out of the earth in the wake of that upheaval. Rising from a portal to hades, or something. The riff on the old “Mummy” story would have added some needed punch, but maybe that was more punch than the film makers wanted.

Given the otherwise bland happenings, the mouthings by possessed child Jocko (Benji Purchase) are a somewhat funny riff on Linda Blair’s classic “Exorcist” exhortations. The movie could have made better use of the time by showing more of the trapped children, wandering as zombies in the lost dimension of Braque’s making. That and the great opening scene of the motorcycle powered merry-go-round are exciting stuff.

The doctors’ misdiagnosis of Jocko’s possession, and Laura’s passionate but futile objections, lead to a curious sequence involving a blood transfusion. Apparently she knows, being gifted with other-worldly insight, that this transfusion will be harmful, fatal or worse for all involved. A potentially yeasty plot point not thoroughly exploited. Instead the viewers get a lot of screaming and running around with predictable results.

In the end, enlightened parents and, mostly, the grandmother, come to the rescue. A nice enough reinforcement of family values, but about as exciting as hot chocolate. Sis and the boyfriend could have, and should have, done it on their own, maybe with the help of a big creepy earthquake crevasse. Nice special effects when nasty Braque gets his mojo doused, but that is too little, too late, and too predictable. The saving grace is Mr. Spall, who might, someday, return to actual scary movies. With his success as an established actor, there could be wonderful potential to attract a screenplay that would not be soon forgotten.