Up for an Oscar for Best Film in a Foreign Language, “Cold War” delivers a passionate romance caught in the cross-hairs of Stalin’s Iron Curtain. Brilliantly executed, it has already won the European Award for Best Film. 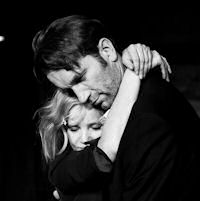 It is an exquisitely shot black and white film that juxtaposes the ruins of post-WWII Europe with the challenged lives of those trying to pick up the pieces of derailed lives. It is also a study of love and freedom.

In the beginning, Wiktor (magnificently played by Tomasz Kot) is a pianist and music director for a project celebrating folk music in post-war Poland. Soon the Stalinist art squad commandeers the popular troupe and demands addition of patriotic songs praising Stalin with a stage backdrop of his portrait. This grates on the pride of the Polish-occupied people, who have a love for their folk songs but an abhorrence of Soviet presence.

Wiktor becomes smitten with one of the young girls, Zula (fantastically played with a range in age), in the Polish troupe. At first, it’s her look, then her voice and then her spunk. She is on a kind of parole after her conviction for the attempted murder of her father. She matter-of-factly explains to Wiktor that it was because her father had mistaken her for her mother.

Her lovely voice becomes the star of the troupe. After a performance in East Berlin, Wiktor wants her to escape to the West with him.

The tension between national allegiance, creative freedom, and a successful career is stirred with a sensual tension that burns throughout the film.

Paweł Pawlikowski, the director of “Cold War,” is friends with Alfonso Cuarón, the director of another Oscar-nominated film, “Roma.” Some years ago they discussed these film projects, coincidently both loosely based memoirs involving their parents.

Both men were nominated for Best Director and their films for Best Foreign Film in the British Academy Awards, with “Roma” not only taking away the honors, but also winning for overall Best Film. However, “Cold War” took the Best Film and Director honors in the European Awards, along with Best Screenplay. Joanna Kulig, as Zula, deservedly won as Best Actress.

While Cuarón carefully wrote out his screenplay beforehand, Pawlikowski created his film in a more fluid, “Casablanca” way – writing and re-writing as the filming went on. Shot in black and white, Cuarón’s scenes are reminiscent of staged stills with stark shadows and sometimes geometric patterns, while Pawlikowski’s cinematography, especially in the night scenes created by master Lukasz Zal, is luminescent, revealing a secret intricacy, like the complicated dance of his characters where a serious misstep might lead to deportation, prison or an irrevocable fissure in the relationship.

Juxtaposed to rival “Roma,” the strikingly passionate “Cold War” forces the viewer to care not only about the characters and the story but about the essential values of freedom and love. Winner of Best Film in a Foreign Language by the New York Film Critics Circle and Best Director at Cannes, Pawlikowski’s work has stunning depth.