Review: Of Fathers and Sons

“Of Fathers and Sons” is a startling Academy Awards nomination. Talal Derki, a Syrian based in Berlin, dangerously masquerades in northern Syria as an al-Qaeda sympathizer. He lives as a guest of Abu Osama, one of the founders of Al-Nusra, the Syrian arm of Al-Qaeda, for two and a half years with an agreement to document Osama and his sons. 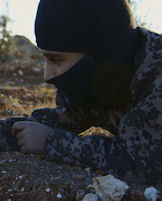 What we witness is a stunning display of disgust for the Bush administration and hate for all Americans. Osama names his oldest son Osama, after bin Laden, one of his beloved heroes. He prays to Allah for a son to be born on the anniversary of the destruction of the World Trade Tours and his prayer is answered.

A true underground reporter in a dangerous world, Derki captures the life of this Syrian extremist and his six sons, all 13 and under. The females don’t count. As a matter of fact., Osama laughingly tells his buddies how he directed his youngest son to shoot off the head of one of his daughters if she is seen without wearing a hajib.

Osama believes in the mission of a holy war against all opposition. He desires Sharia Law and a Muslim-run caliphate state. He believes in a jihadist war, culminating in World War III, that ends in the ultimate victory of Islam.

Garrulous, friendly, fun, and even loving with his sons, Osama happily sings, “We will die with pride and honor. For no good comes from living like slaves.”

This is the last of my sequence of reviews for the films up for this year’s Academy Awards Best Documentary. This film, originally reviewed by IJM in December, is the most unsettling and bold choice for the Academy to allow in its list of nominees. It’s a keen look at the mind of an al-Qaeda leader and a dire warning of an unending resistance to western cultural influence.

Derki, also known for “Return to Homs,” a winner of six Best Doc awards including the 2014 Sundance Film Festival’s World Cinema Grand Jury Prize, is an accomplished filmmaker who has worked for CNN and been the recipient of numerous funding grants from sources as diverse as the Sundance Institute Documentary Film Program, the Ford Foundation, the German Film Fund, and the Doha Film Institute. So far, “Of Fathers and Sons” has been nominated for 30 awards and won 10. 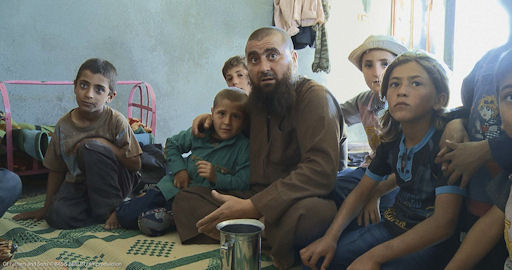