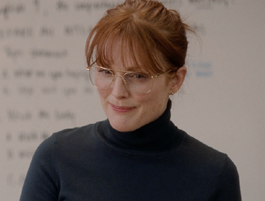 Julianne Moore plays Linda Sinclair, a high school English teacher in the small town of Kingston, Pa., who is almost believable as the town spinster (she has a problem with uncontrollable sexiness). Unmarried and seeking refuge in her job, her apartment and her two cats, Sinclair is forced into the open by the sudden appearance of former star pupil Jason Sherwood (Michael Angarano). Jason has returned from New York after a couple hard years of trying to make it as a playwright and has plea bargained with his narrow-minded pater, Dr. Tom Sherwood (Greg Kinnear), to go to law school and make something of himself.

Right off the bat, Sinclair and the good doctor are soul mates. We can see it in their eyes. They are bold troubled by the fact that life is passing them by and they do not seem to be able to do anything about it. Linda learns that Jason has written a screenplay, the screenplay of a lifetime, based on his traumatic upbringing in the household of his father, Doctor Demento, and his failed attempt to do it his (Jason’s) way. Or something like that. Seizing on the opportunity to act on the inspiration she missed, Sinclair spearheads a movement to produce the play for the school’s annual, much anticipated, drama gala.

Director Craig Zisk (producer of “Weeds”) has to hustle to get some laughs out of this mediocre set-up. He prays for a miracle and the miracle comes in the form of Nathan Lane, playing Carl Kapinas, Broadway refugee high school drama teacher and a man in severe need of redemption. Sinclair convinces him that this play will be his salvation. Of course, there are hurdles to be cleared. The play ends with a death that is quite unsuitable for high school audiences and even more unsuitable for principal Trudie Slocum (Jessica Hecht) and Vice Principal Phil Pelaski (Norbert Leo Butz). 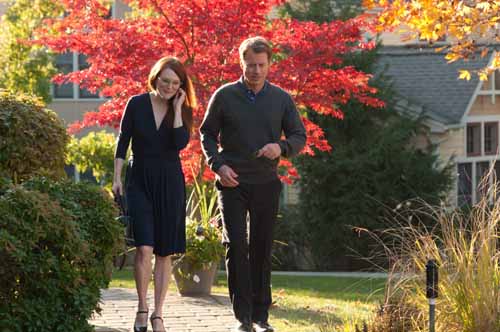 Channeling his countless performances as the perfectly feckless speaker in forked tongues, Nathan Lane does the right thing in the principal’s office. He lies, and the show is on. Somewhere in the middle of this State and Main fiasco in the making, Ms. Sinclair and Jason do the wrong thing. In the classroom. Well, it had to happen somewhere, or where would we be for a plot? And the show is off, and on, and off. You know the rest.

After the all-too-short performance by Nathan Lane, the next saving grace in this film is the remarkably funny performance by Jessica Hecht as the school principal. The screenplay puts her into the perfect position to represent the enormously conflicted role that school teachers and officials must play in the present day. They are constantly forced to reconcile the culture shock of parents with the fearfully worldly outlook of the students. The two worlds have always been at odds, but the world of the internet is pulling them farther apart daily.

In this film the power of the Internet is given its fifteen minutes of fame when teenage dolt Will (well played by Charlie Saxton) posts the smoking gun argument between teacher Sinclair and former student Jason. Although not quite the perfect student-teacher scandal, it is close enough to cause a ruckus. But, fortunately, not close enough to end the film with jail time.

“The English Teacher” is an entirely watchable film, but one that has the legendary Ms. Moore biding her time until her next genuinely significant role appears.