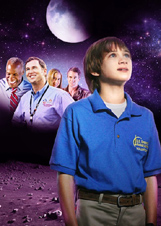 Walden Family Theater is proud to announce the Space Warriors Blog App and a chance to win a family trip to Space Camp!

Watch “Space Warriors” on the Hallmark Channel (May 31 at 8/7C) for a chance to win a trip to the U.S. Space and Rocket Center’s Space Camp for the whole family. Keep an eye out for the secret keyword for a chance to go on location where Space Warriors was filmed and train like a real astronaut.

In addition, It’s Just Movies is giving away a “Space Warriors” Blu-ray Combo Pack (Blu-ray + DVD + VUDU Digital Copy — Walmart Exclusive) to one of our readers.

In “Space Warriors,” six highly-skilled teenagers are hand picked to be part of a summer space camp competition but they don’t realize that they will be forced to solve a life or death crisis aboard the International Space Station as the world anxiously watches.

Starring Thomas Horn, Danny Glover, Josh Lucas, Dermot Mulroney, Mira Sorvino and Booboo Stewart, “Space Warriors” is the second film in the Walden Family Theater original lineup featuring great family entertainment, airing Friday nights exclusively on Hallmark Channel. Walden Family Theater is creating films for the whole family to enjoy together, so make sure to mark your calendars and gather around the television to watch all the great upcoming films.

Past films include “The Chronicles of Narnia” series, “Holes,” “Nim’s Island,” “Charlotte’s Web” and “Return to Nim’s Island.”

Check out the Space Warriors Blog App below and you can:

• Win a Family Trip to SPACE CAMP — Tune in to Space Warriors on the Hallmark Channel May 31 at 8/7c for the secret keyword to win a family trip to the U.S. Space and Rocket Center’s Space Camp.

• How Spacey Are You? QUIZ – Are you a Space Warrior? Do you use the stars to navigate your journeys instead of the map function on your smartphone? Take this quiz to find out whether you’re destined to orbit the cosmos or whether you’re happiest living here on this planet.

• Prepare for Blast-off! Space Warriors Viewing Guide – Mark your calendars for May 31st and check off the boxes as you watch Space Warriors for the most spectacular, spaciest experience!

There are several ways to enter the contest:

The contest will end June 5 at 11:59 p.m. EST. United States residents only. The prize will be sent via FedEx or UPS. No P.O. Boxes please.