Review: The Fool (aka Durak)

A multiple prize-winner at the 2014 Locarno Film Festival, Yury Bykov’s movie is a profound tragedy. 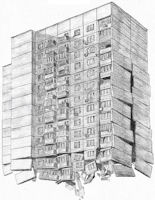 Opening with a no-holds-barred look inside a dilapidated Russian state-owned apartment building that houses the poor, the desperate and the despaired in bestial conditions. Everything in the building is failing, the electricity, water, sanitary plumbing, and the structure itself. The excellent camera work takes the viewer into places no one wants to go.

The scene shifts to the tiny apartment of plumber Dima (Artyom Bystrov), an earnest young repair crew chief for the public utility works. When a steam line breaks in the building, scalding a drug addict who is beating his wife and daughter, Dima sees a crack in the wall. Going outside into the frozen, windswept, unlivable streets outside the building, we see the crack starting at the bottom of the brick wall and progressing all the way to the top. The camera sweeps down to street level as Dima looks under one of the building corners. Bricks fall out of the wall.

Within the first 15 minutes of the movie, we know, just as Dima knows, that this 10-story building will soon collapse, killing most or all of the 800 marginalized people stuffed into it. He rushes to notify the authorities, who are in the midst of a lavish party celebrating the top housing official. Dima is sure these leaders will react immediately to save the lives at risk. Dima drags a reluctant boss to the top of the building and drops a bottle off the edge. It falls about 15 feet from the bottom. The building is tilting badly, about to fall over.

As the scene shifts from the destitute souls inside the building to the bosses at the party, a breathtaking drama unfolds. The officials, drunk and happy in the beginning, slowly become the destitute. The audience is admitted inside their world as they enter into an existential purgatory and are rendered into pulsating jelly. One by one, they have stolen the money to repair the building, stolen the money to build a replacement building and sold their power to local developers.

They have looked the other way for too long. Now, they have the choice of admitting their sins and ruining their careers, their lives and the lives of their families or simply allowing the building to collapse. Dima is the conscience of the group, but it seems that they all will stop at nothing to save their own skins. Threatened with his own death and that of his family, Dima makes one last appeal to the only allies he has. As one might guess, Dima the fool has misunderstood all along.

The power of this movie (and screenplay by director Bykov) is the remarkable whirlpool of tension and moral destruction that overtakes everyone in the story. Ultimately, there is plenty of guilt to go around. On the surface the story might be an expose’ of murderous thievery by Russian housing authorities. But in the end it is something deeper than that. The beauty and strength of the production makes us all party to the mutually assured destruction.