The opening scenes of “The Homesman” are as bleak as death itself. Parched plains, patched together clapboard houses, poverty so deep it rises up to greet you at the front door, and wind that never, ever, lets up. Tommy Lee Jones’ second feature film shows an America that promised its pioneers their own land and the mastery of their own destiny. What it gave them was a savage, untillable, untamable landscape that made the setting for Jones’ earlier “The Three Burials of Melquiades Estrada” look like the Garden of Eden. 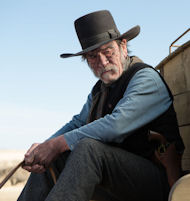 Nebraska is the new-found home of Arabella, Theoline and Gro. If things do not change, it will soon be their new-found grave. Grace Gummer, Miranda Otto and Sonja Richter share the spotlight with Tommy Lee Jones as George Briggs and Hilary Swank as Mary Bee Cuddy in this light but tight saga of five unlikely partners, three obviously insane and two heading in that direction, making their way across an unforgiving wilderness.

Transformed in body and soul from the tough street fighter in “Boys Don’t Cry” and “Million Dollar baby” Hilary Swank is stunningly born again as steer-leathery Mary Cuddy. Described by her male acquaintances as “plain as a pail,” Mary Bee has a heart of gold, although it is hard to see through the dust, dirt and diphtheria of the freeze-dried plains. She has volunteered to transport Arabella, Theoline and Gro back to Iowa, their only hope for recovery from what appears to be lethal insanity.

On the way she runs into drifter and part-time scalawag George Briggs. She saves his life after first extracting his promise to accompany her on her journey. It is a mission for her, but it will turn out to be redemption for him, although at a horrendous cost. In the 1850’s the trip from Nebraska to Iowa could easily prove fatal. Even those of sound mind and body were taken by the thousands before they reached the so-called promised land. Half of those died or went bust after they reached their new homes.

Shot in luscious 35mm negative, wide-screen format by cinematographer Rodrigo Prieto, the setting follows up on the pristine but deadly landscape of his “Brokeback Mountain” with the brooding intensity of his “21 Grams.” The star of the movie is the endless plains of the Midwest, complete with sporadic snow, sub-freezing temperatures and never ending wind. Most times, the only shade from the sun and shelter from the snow is a dead tree between two dry creek beds. It is a wind and a chill that undoes anchors and sets the mind adrift, looking for nothing but peace and quiet, and finding none.

The screenplay by Jones, co-written with Kieran Fitzgerald and Wesley A. Oliver, is based on the novel by Glendon Swarthout who also wrote the John Wayne hit “The Shootist.” The score by Marco Beltrami is as ephemeral and as piercing as the wind across the prairie. Although the music stays in the background it seems perfectly suited to every scene and stops just short of being melodramatic. Beltrami was nominated for the World Soundtrack Awards Film Composer of The Year for this film.

This is the story of the redemption of George. In the beginning he proclaims himself to be “attached to no one but George Briggs.” His emotional capacity has been stunted by his stint in the cavalry, fighting in either the Civil or American Indian Wars, or both. He has given up on humanity and dropped out like Bogart’s Charlie Allnut in “African Queen.” By the end of the film he has unwittingly found a new inner strength, a strength transferred to him by Mary Bee. Although his soul may well have been saved, he will live the rest of his life trying to live up to her sacrifice, and he may not be up to the task. Confronted with danger, his willingness to die is a model that he unwittingly teaches Mary.

“The Homesman” features brief but spectacular appearances by Tim Blake Nelson and James Spader, backed up by solid performances by Meryl Streep and John Lithgow. Nominated in 2014 for the highest prize awarded at the Cannes Film Festival, the Palme d’Or, this is a beautifully photographed and scripted road trip that has a heart of gold without dropping into self-pity or the maudlin. 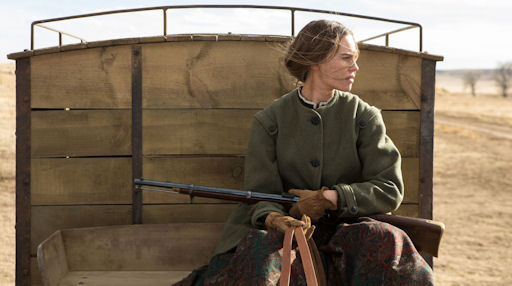