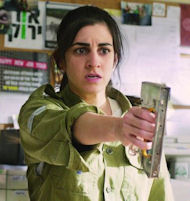 Talya Larvie’s military dramedy “Zero Motivation” is fresh, untamed and funny. This is amazing, considering it shreds one of the top military organizations in the world. Featuring the women of mandatory conscription, the setting is a desolate Israeli military outpost. Critical, no doubt, to security, the female draftees treat their service like teenagers acting out against curfew.

In the opening scenes, Zohar (Dana Ivgy) returns from weekend leave with Daffi (Nelly Tagar) to the barbed wire, dust and barracks of their workplace/home/prison. Daffi is spectacularly depressed.

She cannot go another day serving snacks to the officers and pretending to work in the dysfunctional / non-functional Human Resources section of the glacially inoperative Administrative Department. Zohar should talk, from what we can tell she does nothing but play video games in the office. At first shockingly hilarious, this activity becomes boring, almost an excuse for a screenplay, by the end of the film.

They are greeted with scornful criticism by ambitious and emotionally hopeless Rama (Shani Klein), the head of Administration. Rama, although completely lacking in leadership, the military has placed her in charge of the five girls who make up most of this film. Zohar and Daffi are the prime movers, while Rama, Livnat, Liat and Irena provide the background for central military malfunction.

The movie is a funny, but strange, combination of “MASH,” “Catch 22” and the US TV series “The Office.” The film is shot in a style that is old, by American standards, but works fantastically for this none too experimental comedy. The show feels like “MASH” in the 1970’s and this funkiness brings the audience even closer to the women.

When Daffi meets newcomer Tehila, she is convinced Tehila is her replacement and she will soon be on her way to her requested post, glamorous Tel Aviv. As it turns out, Tehila is far from her replacement, having faked her way into the service to be with her officer boyfriend who is stationed on the base.

At the risk of being grossly sexist, the film fearlessly commits to dividing the women and the men into have-nots and bosses. For the most part, the women are astoundingly unmotivated, seemingly avoiding work at all cost. The men, all military officers, shuffle around in the background, serious career officers dedicated to protecting the nation and being alert to every nuance of danger. This disjunction brings about a surprise that is funny, and provides some relief from the realities of actual war. 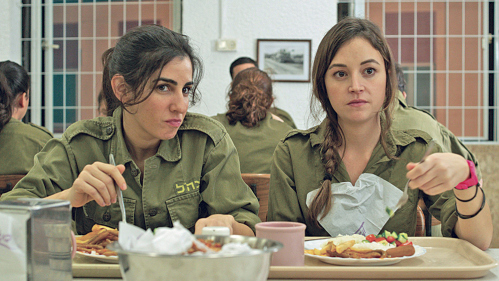 In spite of being well into her 20s, Zohar is a virgin. Mocked, she dedicates herself to having sex as soon as possible, with whatever soldier is available, with the expected pratfalls and pants-down escapades. This is where the film makes a turn for the worse. It does the undoable in light duty commercial comedy; it takes itself seriously.

Writer/director Lavie sets up what could be a hilarious, high stakes “inspection” of the administrative office. The character of Zohar refuses to take the inspection seriously, which is fine, but she does so in a way lacking in either humor or originality. She more-or-less stops working and deals with the situation in an extreme, but not particularly funny, manner.

By the end of the film, Daffi has had a weird awakening and enrolls in officer training school. A suitably strange and remarkable outcome ensues, but the outcome is not so much humorous as it is brutally realistic. There is not enough cleverness in the actions of the two women to bring the audience over to their side. There is not enough random good luck to confirm that they are really doing the right thing, even if they are not completely sure what that is.

Daffi finds herself in a position unimaginable only months before. Her dream of wearing high heels in the toney streets of Tel Aviv seems to be dissipating into an olive-drab camouflage of bureaucratic purgatory. Zohar makes sure the corps is sorry they ever saw her, but a computer misadventure finds her in jail.

A no-holds-barred stapler fight ensues and the two unwilling soldiers realize that although all is fair in love and war, the only real victory is the loyalty of friends and the preservation of confidences.

Bogging down into slapstick, this is still fun from start to finish. Winner of the Best Narrative Feature prize at the 2014 Tribeca Film Festival, the film was the recipient of six Israeli Academy Awards, including Best Director, Best Screenplay and Best Lead Actress.