Emerging director Brad Furman grabbed the gold ring with this bit of fantastic casting starring Bryan Cranston from the smash “Breaking Bad” series. The BB Cranston was a bad guy playing a good guy. In this flick, he is a good guy playing a bad guy. As it turns out, it is the same thing, at least in Hollywood. 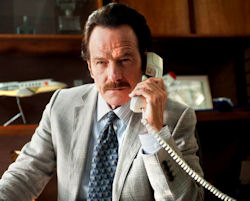 Overall, Ellen Sue Brown’s screenplay (based on the book on US Customs Agent Robert Mazur) is a straightforward undercover cop gig. There are no Earth-shaking plot twists and, thankfully, no car chases, no gun fights and no martial arts. Bryan Cranston goes underground, meets and greets an eccentric and, reportedly, vicious group of very rich criminals and busts them all.

Amazingly enough, at the end of it all, having met Pablo Escobar himself and with his cover completely blown, Agent Mazur goes back to work for the US Customs Office and his wife goes back to coaching their kids in the neighborhood little league. The result is something like “Catch Me If You Can,” a well-produced, well-acted thriller that adds little to the genre. Even so, it is great fun and fascinating to watch for all of its herculean 127 minutes.

John Leguizamo reunites with director Furman after starring in his 2007 debut directorial heist movie “The Take” and “Lincoln lawyer” in 2011. Cranston and Furman worked together in the latter movie. This experience shows in Furman’s latest take on the action thriller flick. Cranston and Leguizamo have a practiced chemistry together, the former apparently having studied the high school teacher’s formula in the “Breaking” series.

Leguizamo is great as Mazur’s street savvy sidekick. He develops a good dynamic with Cranston, who, on the surface, is his exact opposite. As with any buddy cop flick, it is the forced mating of opposites that makes the film. The Hispanic mugging makes Cranston’s imitation of an international money launderer look hilarious. There are enough accidental mishaps to keep the plot interesting, as the agent has to pull excuses and make up scenarios out of thin air when the going gets tough.

The viewer expects someone as smart as Escobar to see through the ruse at any minute. But he never does. Or, never did, if the story is actually true. How can we ever know? Federal undercover operatives are paid to lie to us and it is probably just as well that they do.

Great performances include Juliet Aubrey as Agent Mazur’s tormented wife (“Just one more and I swear I will quit forever.”) and Amy Ryan as customs chief (“Move it, pissant!”). Diane Kruger somehow manages to get third billing for the film, even though her character does next to nothing and she and Cranston go nowhere. The show stopper is a stunningly over-the-top bit by Olympia Dukakis as Mazur’s marginally law-abiding Aunt Vicky. In only two appearances, she threatens to steal the entire show.

Be there or be busted. 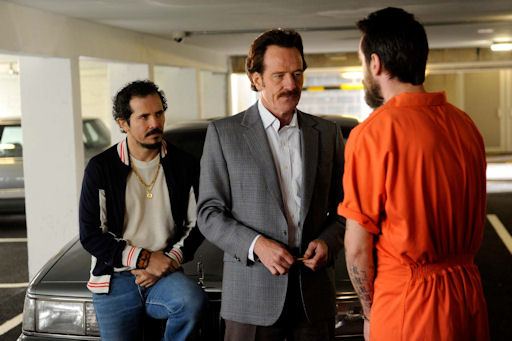