“Tell me, Mother, would you like to see again?” After 15 years in the dark, the crinkly, barefoot grandmother is stunned by the question.

Despite the corrupt, bizarre, dark, despairing days we live in, there are beacons of angelic light blinking out there in the real world. This is a documentary on one such effort of simple goodness that takes place in the mountains of Nepal.

Squished up from ancient upheavals against the highest mountain range in the world, the Nepali region, with its multiple eco-levels and rich soil in the lower levels, was one of the world’s earliest heavily populated locations. But, frustratingly, its old traditions, village and family loyalties, geographical impossibilities and at least 123 local languages are factors keeping its progress in the dark ages.

Without roads, basic infrastructure and communication coupled with an inefficient, financially despairing government, the most basic necessities are unavailable to many living in the higher areas. This is why Nepal is a haven for charities. And this is where our angelic light is sparkling.

Nearly 40 million people in the world are blind due to cataracts. Ninety percent of these people live in the world’s poorest countries. However, almost all cataract blindness can be eradicated through a six minute per eye procedure where an intraocular lens is implanted. While it once cost $500, now the operation can be done for less than $2.

Two charities, the Seva Foundation and the Lions Club, have organized free eye operations one day a week at locations throughout Nepal. The first problem is how to let those in need know the service is available. The second problem is transporting them on the treacherous foot paths and waving rope bridges to a clinic.

This film takes us through the beautiful terrain of Nepal to find a man and his wife who have been blind for 15 years. Then there is the issue of convincing them to leave home to navigate the steep trails without vision.

This wonderfully crafted film is a production of the Emerson Collective by Vermilion Films in association with HBO Documentary Films. It is scheduled to premiere on HBO July 18. 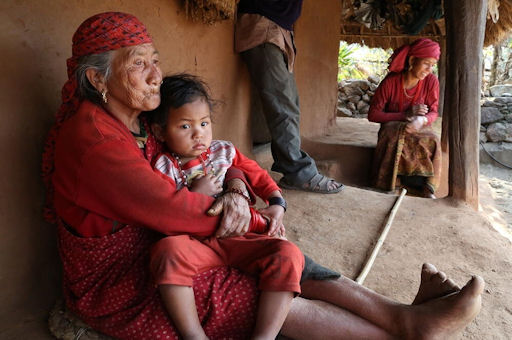