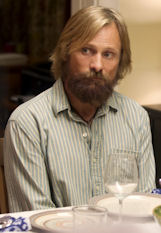 Mortensen plays Ben, the father of a family of six kids aged 6 to 18 who have long since left society to live far off the grid. During the first half of the movie father Ben appears to be a gentle enough soul. He loves his children and, for the most part, they love him. But their extreme lifestyle is bursting at the seams. Something has to give.

A combination of Mother Teresa and Ted Kaczynski, Ben has schooled his children in the extreme political dogma of the far left. No need to recount it here, you have heard it all. Nonetheless, the film maker figures out a way to make something undeniably cute about a six-year-old skinning a squirrel and saying “stick it to the man.” The kids have also learned astronomy, self-defense, Buddhism, mathematical string theory, how to climb a vertical rock face in the rain, the meaning of life and probably how to cure cancer.

You just have to go along with a few things in this flick. It is for a good cause.

Eldest Bo (George MacKay) takes on a lot of the interaction with dad, since he has been accepted to all of the best universities in the USA. Not just one of two, all of them, from coast to coast. From Harvard to Stanford and every one with a name worthy of dropping in between. Not bad work by father Ben, in addition to teaching the kids seven languages. Living in a wood hut.

It is worth getting through this claptrap because in the second half of the film things start to open up. There is the emergence of grieved father-in-law Frank Langella. The Bayonne, NJ, native is a perfect foil for Mortenson’s goodness and light Ben. He does not loath Ben just because he is afraid of getting granola on the carpet, he blames Ben for his daughter’s ruined life. When his daughter dies, Ben and dad have different ideas about the wedding, the kids and life.

Director Ross does a good job with the child actors. Mortensen and Langella do not need much directing; both were born to play their parts. Mortensen slides smoothly from his “Lord of the Rings” Aragorn warrior role and his “Eastern Promises” silent but deadly killer role into his intellectual man-as-an-island back-country guerrilla leader role. Langella represents the urban establishment. In the beginning the lines are clearly drawn, but by the end of the movie the boundaries between new and old, and right and wrong, blur more and more.

César-winning lenser Stéphane Fontaine does a good job with the lush scenery but stops short of exploiting the natural beauty of the Shangri La at the expense of the characters. This film is firmly rooted in life’s most difficult and important decisions.

Rated R for language and brief nudity, this would be a great movie for families with an intellectual bent. It shows what can, and cannot, be done.